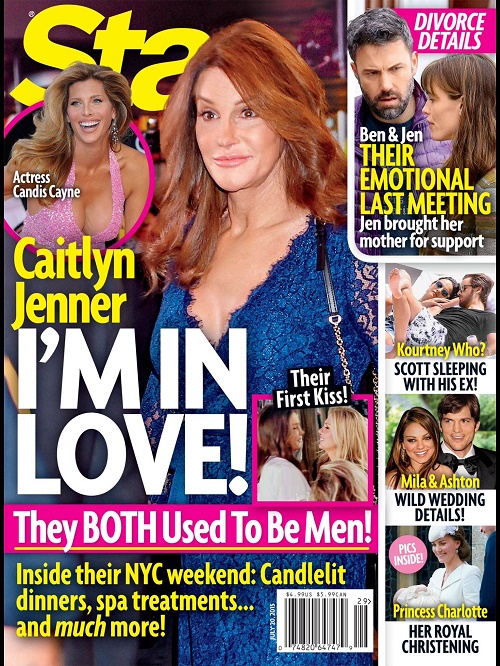 Caitlyn Jenner has found a girlfriend in Candis Cayne! When Caitlyn, formerly known as Bruce Jenner, finally confirmed that she was transforming into a woman – there was a lot of speculation as to whether she would be dating men or women. According to a new report, Caitlyn has finally decided on a woman – who is also transgender. The July 20 cover of Star Magazine reveals that Caitlyn Jenner is dating Candis Cayne.

Caitlyn and Candis were spotted all over New York City in June for the annual Gay Pride Festival. Jenner made a slew of appearance at different events and venues, and Candis was right by her side for every one of them. Candis Cayne is no newbie to the celebrity scene. She is actually a part-time model and a well known and sought-after singer in the gay nightclub scene.

The July 20 edition of Star Magazine reveals, “After her monumental life change Caitlyn is ready to open her heart again, and really how could you ask for a more perfect romantic partner than Candis? She has basically been through the same struggles and confusion, so she would be the perfect person for Caitlyn to lean on as she continues her journey of transition.”

Sources at NYC Pride Festival dished to Star Magazine that not only was the chemistry between Caitlyn and Candis undeniable, but when Cayne got up on stage to sing she actually dedicated her performance to Jenner! Candis and Caitlyn were also spotted over the weekend shopping together, visiting the spa together, and even dining alone on what appeared to be a romantic candlelit dinner. It looks like Caitlyn and Candis could be Hollywood’s next “it couple,” and theirromance is sure to get everyone buzzing.

Do you think Caitlyn Jenner and Candis Cayne make a cute couple? Seriously, how bitter is Kris Jenner right now? Let us know what you think in the comments below!