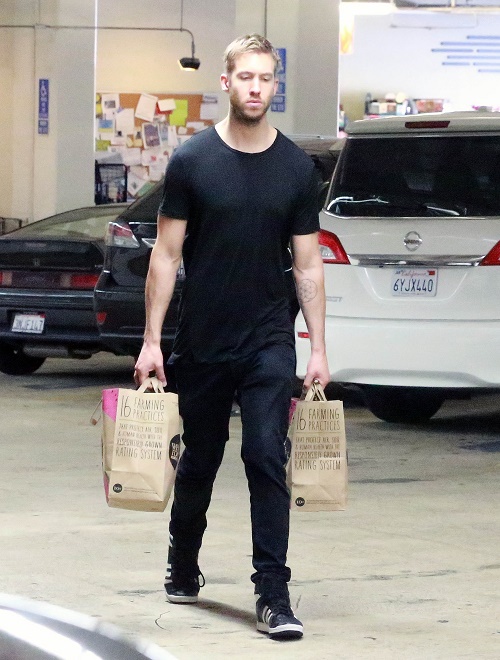 Is Calvin Harris cheating on Taylor Swift? After just a few months of dating, Taylor Swift is head over heels for the Scottish DJ, and the couple is even reportedly discussing marriage and planning on moving in together. But, unbeknownst to Taylor, she is not the only woman in Calvin’s life. According to a new report, Harris is still sexting his former flings!

This week’s edition of Life & Style Magazine reveals that Calvin Harris is having a tough time bidding adieu to his playboy lifestyle, and his phone is still full of his old hook-ups’ phone numbers and he receives hot and steamy text messages from other girls on a daily basis. A source dished to the tabloid, “Before Taylor came along Calvin’s lifestyle was pretty wild. He bedded plenty of beautiful bikini models on the club circuit – Las Vegas, South Beach, Ibiza, you name it. He would keep in contact with them afterward by sending nude pictures of himself.”

According to the magazine’s inside source, Taylor Swift should definitely be concerned about what her boyfriend Calvin is up to when he is not by her side. When he is on the road, there are women literally throwing themselves at him and competing to sleep with him. The snitch explained, “I can’t imagine how she could trust him knowing all of these knowing all of these gorgeous girls are still trying to sext him and sleep with him.”

Taylor Swift and Calvin Harris’s relationship sounds like a recipe for disaster. Here’s to hoping it works out though – because we’re not sure how many more breakup songs we can take. Taylor seems to have a habit of picking total players and trying to turn them in to faithful boyfriends.

Do you think that Calvin Harris is cheating on her? Why hasn’t he changed his phone number, or stopped texting his old hook-ups? Let us know what you think in the comments below!