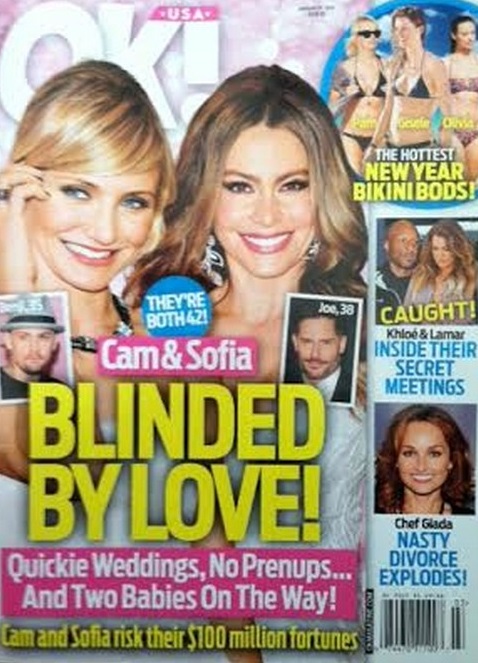 Cameron Diaz pregnant is featured on the cover of the latest issue of “OK!” magazine alongside “Modern Family” actress Sofia Vergara. The magazine reports that both ladies are involved in quickie weddings, no prenuptial agreements and have spring babies on the way. So we are being told that Sofia Vergara and Cameron Diaz are pregnant! Like OK! would know this even though they totally blew the Cameron wedding story! At least they don’t have a photo of the baby bump yet….

Let’s focus on Cameron Diaz, considering that her “quickie wedding” happened on Monday. Cam tied the knot with Good Charlotte rocker Benji Madden at their home in California on Monday. The magazine had a bit of a mishap with their sources, because the tabloid claims that Cameron and Benji were planning a Napa Valley wedding in the spring. Whoops!

A source told the magazine, “Cameron is 42, and having a baby finally feels like the right thing to do. There’s a chance the wedding and baby could happen all at once! Sources say Cam and Benji have been trying to conceive naturally but will be open to IVF in six months or so. Neither of them wants to waste any time.”

Interestingly enough, they’re not completely wrong with the story. Despite reports of a rift in their relationship because of their inability to come to terms with a prenup, the duo did walk down the aisle in a quiet ceremony attended by family and friends. The magazine claims that “Cam has made up her mind to have a small spring ceremony in Napa Valley, not to invite one-time BFF Drew Barrymore.”

According to an insider, the reason behind Cameron’s rejection of Drew was because Drew was said to have disapproved of her romance with Benji. So, it seems like their sources were close to the target with this issue, but Cameron and Benji opted to waste no time and get married right at the beginning of the year. Of course, Drew Barrymore was actually invited, but that’s all we know of that.

Cameron Diaz could be pregnant already, thus the need for a quickie wedding. If that were the case, then all of the pieces of the puzzle would fit together quite nicely, wouldn’t they?