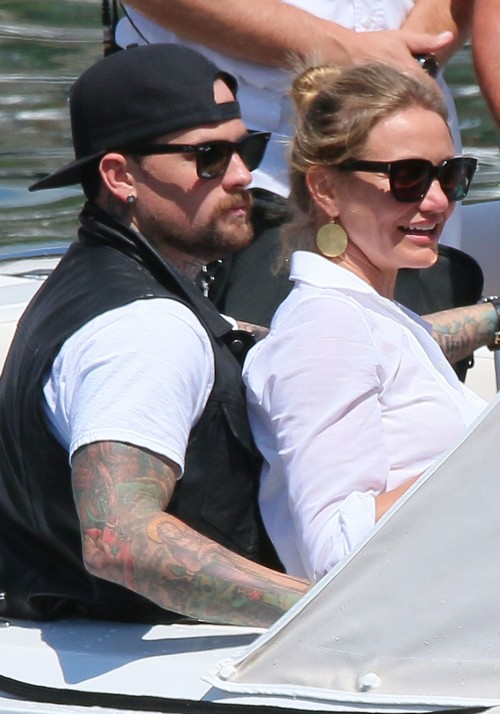 Is Cameron Diaz pregnant with Benji Madden’s baby and could that be the reason Cameron is avoiding alcohol lately? Cameron Diaz and Good Charlotte rocker Benji Madden could easily be one of Hollywood’s most bizarre couples. When Nicole Richie first hooked the hilarious actress up with her tatted brother-in-law, quite a few people were scratching their heads in confusion. But, despite critics and naysayers, Benji Madden and Cameron Diaz appeared to be in it for the long haul. And, they shocked the world when they tied the knot in a small and private wedding on January 5th. Even Cameron’s close friends and colleagues were bewildered by the star’s shotgun wedding.

So, why were Cameron and Benji in such a hurry to get down the aisle? Well, according to new reports from the January 26th edition of Star Magazine, the couple is expecting and pregnant with their first child, they wanted to have their wedding before Cameron’s baby bump was too obvious. Witnesses at Cameron and Benji’ hastily planned nuptials revealed to Star Magazine, “Cameron didn’t take a sip of alcohol. Everyone toasted with champagne while she drank water and hoped no one would notice. She was having a blast, but you could tell that she was self-conscious about her stomach. She hid it with her hand and wouldn’t hug anyone too close to her body. All the guests were whispering that she’s pregnant, and some expressed their happiness to those who already knew!”

Star’s inside source went on to reveal, “Cameron and Benji will make the best parents, they already have a few named picked out!” It really is ironic because Cameron Diaz has received some backlash in the past about not settling down and starting families like all of the other actresses her age. Although Cameron has made it very clear that starting a family is not at the top of her list of priorities, it looks like she has finally caved in to society’s pressures and begun pro-creating.

What do you think of Cameron Diaz and Benji Madden? Will the couple’s marriage last, or do you think that they are too different? Will Cameron’s pregnancy affect her acting career or will she retire? Let us know what you think in the comments below!