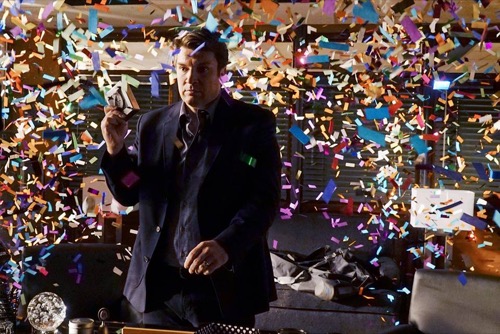 Tonight on ABC Castle starring Nathan Fillion continues with an all new Monday November 16, season 8 episode 7 called “The Last Seduction” and we have your weekly recap below. On tonight’s episode a seductive con man is killed, and the investigation has Castle (Nathan Fillion) and Beckett (Stana Katic) questioning New York City’s upper crust.

On the last episode, Det. Slaughter returned seeking Castle’s help in a robbery case. However, Slaughter became a suspect when the heist case turns into a murder case, and Castle’s unsure about whether his pal was innocent or guilty. Did you watch the last episode? If you missed it, we have a full and detailed recap right here for you.

On tonight’s episode as per ABC’s synopsis, “a seductive con man is killed, and the investigation has Castle and Beckett questioning New York City’s upper crust. Meanwhile, Castle has a surprise in store for his and Beckett’s one-year anniversary as husband and wife.”

Tonight’s episode is going to be great so be sure to tune in to CASTLE on ABC at 10PM EST. We’ll be blogging all the action, be sure to hit up the comments and tell us how excited you are for season 8 episode 7. While you wait for the recap, check out a sneak peek of tonight’s episode below!

Detectives Ryan and Esposito are in therapy. As in Couples’ therapy which in their case can also be considered mandatory seeing as Ryan had once shot his partner in the ass.

So on tonight’s episode of “Castle” the guys were told that they needed a buffer. Meaning someone that could be an impartial during their fights and could also serve to prevent even more arguing. And while the guys could have picked anyone – they picked Castle.

Castle happens to be a very good friend to the both of them and they find they argue less when he’s around. So Ryan and Esposito decided to make Castle their buffer and they did so at the risk of offending their captain. Who is Kate! An as we last seen, Kate didn’t really care to see her estranged husband hanging around at the office. In fact it could be said that she didn’t even want to see him outside of office hours.

Yet in order for their buffer to work, Castle had to actually spend time with the guys while they worked their new case. A young man by the name of Scott McCoy had brutally stabbed in his apartment and the only fingerprints that could be found seemed to match the very same he kept getting into fights with.

So Ryan and Esposito had Anton Ford brought in and Ryan surprised Kate by asking her to do the interrogation with him. But unbeknownst to her, Castle (with Esposito’s help) used that time when she was busy to arrange a nice anniversary surprise for her back at her office. And therefore Kate was shocked to find a balloon and confetti waiting for her.

Such a sweet gesture had made rethink her original plan of pushing him away for his own good. So eventually Kate was talked into celebrating their anniversary by going out to dinner with Castle.

However the case itself had taken an unexpected turn. It seems Anton and Scott hadn’t been adversaries. They had been friends and the reason they staged bar fights was because Anton was paid to act as Scott’s wingman whenever Scott wanted to pick up married rich women.

A distinction by the way that sent off some alarms with the police. For it then made the several deposits in Scott’s account for five grand looked incredibly suspicious. Especially as far they knew Scott had been an unemployed actor when he died. So when they heard about the married women – they wondered if he had been looking for sugar mamas.

But the sad truth is Scott was doing something much worse.

Besides the odd payment for five thousand dollars, there was also a secret apartment that Scott had used but never lived in. So Ryan, Esposito, and also Castle took a look at the apartment for themselves. And what they found was a camera aimed right at the bed.

Now the initial assumption was that Scott had been using the apartment to set up married women and then blackmail them for keeping their affair quiet. However one angry ex-wife later corrected that view. She told the police that Scott hadn’t been blackmailing her. He had actually been hired by her ex-husband to capture “proof” of an infidelity.

Apparently Infidelity is one of the few things that can devoid quite a strong pre-nup and as it turns out several husbands had hired Scott explicitly for his “services”.

Though the real kicker when the police found out that all the married men that had hired Scott had been using the same Attorney. Lindsey Trent was known as one of the best divorce attorneys in New York and funnily enough her secret weapon was actually Scott. Who she must have been hiring for her clients if it was only her clients that were using services.

So Castle went in undercover. He didn’t exactly have Kate’s permission to do that but he wanted to help the guys with their case. And true to fashion Castle was later caught before he could take a look at Lindsey’s records. Yet luckily he had guess beforehand that he wouldn’t be making much headway so he had rightly brought in Alexis as well.

And Alexis had gotten all the information that they needed.

Scott had to come to regret his job and he told someone right before he died that one woman had changed everything for him. So the police wanted to know who was the last person that had hired Scott and it was revealed to be George Keller. As in one of the Kellers of Keller game empire.

George was on wife number three and so the detectives had every reason to believe that he wanted to get rid of her like he did the rest. But he hadn’t. Surprisingly he was just about to renew his wives with that wife and had splashed over two million dollars on a new rings for her.

So the fact he hired Scott last simply did not make sense. And while the detectives were banging their heads about what to do next – Ryan and Esposito’s fight had finally boiled over and they both demanded new partners. Thereby ruining Castle and Kate’s mood for an anniversary dinner.

Yet in spite of their plans to end the partnership, Esposito and Ryan did a little more digging and found who Scott had been hired to sleep with. And it turns out George hired Scott to sleep with his mother Penelope Keller.

Apparently mother and son had been fighting over control of the board though their company is based on family values. So George figured if he publically embarrassed his mother then she’s be more willing to step down as president of the board. And she would have but Scott had never used their affair against her.

It seems he did more than sleep with his clients. He also talked to them and in Penelope’s case he found out her son wanted to oust her so he could productions overseas where it will be cheaper. Even though it was also deprive thousands of people out of a job.

So after he slept with Penelope, Scott confronted George at his office. And security cameras has both him leaving the building alive ten minutes later as well George staying in his officer until long after the time of death.

Therefore George called someone else to do his dirty work and it looks like his lawyer was willing to do anything for her clients. So the detectives showed up at her office to arrest her and pulled out a gun on Esposito before he could blink. Yet at the very last minute Ryan jumped in front of his partner and took a bullet that was meant for Esposito.

Fortunately the bullet his Ryan’s book that he had put in his pocket so he was ok and so was his newly refreshed friendship with Esposito.

But once they arrested Lindsey, she turned on George before he could leave the country on the private plane.

And just as the episode was ending, Castle and Kate decided to take a break from their break and simply celebrate their anniversary as married couple would do. Only Castle took the time, when it was all over that is, to look through Kate’s messages on her friend. So the one thing that Kate feared – Castle wanting to get involved in her secret investigation – was now happening because she kept secrets from him.