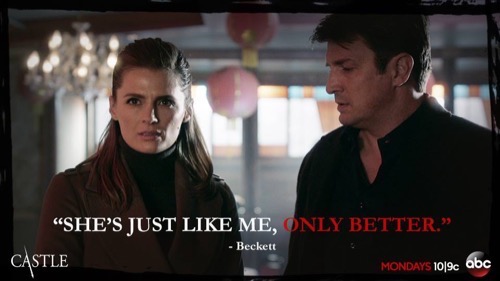 Tonight on ABC Castle starring Nathan Fillion continues with an all new Monday March 16, season 7 episode 17 called “Hong Kong Hustle,” and we have your weekly recap below. On tonight’s episode, an ambitious detective from Hong Kong joins forces with Castle [Nathan Fillion] and Beckett [Stana Katic] because she has info on a murder victim discovered in a park. However, Beckett soon learns that there may be secrets about this detective and the victim.

On the last episode, an astronaut was killed while training for a trip to Mars, and the case perplexed Castle and Beckett because they discovered no one could have entered the place where the victim was found: a sealed simulation chamber. Did you watch the last episode? If you missed it, we have a full and detailed recap right here for you.

On tonight’s episode as per ABC’s synopsis, “after a man is mysteriously murdered in a park, Castle and Beckett team up with a competitive, high-powered female detective from Hong Kong, who has information about the victim. But as Beckett digs deeper into the case, she realizes neither her Hong Kong colleague nor the victim may be quite who they seem.”

Tonight’s episode is going to be great so be sure to tune in to CASTLE on ABC at 10PM EST. We’ll be blogging all the action, be sure to hit up the comments and tell us what you think of this new season. While you wait for the recap, check out a sneak peek of tonight’s episode below!

Tonight’s episode of Castle begins with a man jogging through the woods in the dark – he sees someone in a trench coat standing over a body. He jogs over and the girl in the trench coat stands up and pulls a gun on the jogger.

Beckett and Castle are lying in bed together the next morning, she reads in the paper that one of her old co-workers is being promoted to Sergeant. She confides in Castle that she feels like she is “falling behind” and she should be in some sort of leadership position by now, Kate admits that sometimes she thinks she should have stayed in DC.

Kate and Castle head to the park where a man named Henry Graham was shot and killed during the night. The jogger is still alive, he says that the shooter was Asian and instead of killing him, she told him to “run.” They are baffled because the Asian woman took the victim’s keys and phone – but she left his wallet and money. They’re not sure what Henry was doing in the park after dark, but they are sure it was no good because he has done time in prison before for aggravated assault.

Kate and Castle head to Henry’s job, a towing company. They learn that Henry was a repo truck driver, and he was constantly being threatened by people whose cars get repossessed. Kate tells Henry’s boss that they need a list of all of his recent repos. Henry’s boss says that yesterday Henry was acting strange, he left for lunch and never came back to work. And, he was asking for access codes to a 2013 X5, and they don’t even have an X5 on their repo list. Henry’s boss and his parole officer insist that Henry was a “stand up guy.”

They bring her in for questioning, she tells Kate that she and Henry were friends from several years ago. She was supposed to meet up with him in the city, when he didn’t show up she tracked his cell phone to the park and Henry was already dead. She didn’t call the cops because she was going to solve his murder herself. They check Jong’s story and realize that her flight didn’t land until after Henry was killed, so she couldn’t have murdered him. Kate has no choice but to invite Jong to help them work the case.

Jong has one lead – she found a receipt in Henry’s pocket for a Chinese restaurant. They head to the restaurant and learn that Henry was there for lunch the day that he died – and he got in a fight with a man in the mid 40’s. The man used their free wifi at the restaurant while he was with Henry, so Jong tracks his emails and learns that his name is Michael Glassman. Kate thinks it must be some sort of mistake, because Michael Glassman is an FBI agent.

Kate calls Glassman in, he lies and says that he doesn’t know Henry Graham. Glassman thinks that Kate is making a mistake and tells her he never ate at the Chinese restaurant. He snaps at Kate that she “doesn’t want to know,” and storms out of the interrogation room.

Ryan gets a break from the lab, there was traces of formaldehyde on the bottoms of Henry’s shoes. Kate tells them to track down Henry’s credit card transactions, and financials. Then she announces that she is going out for a girl’s night with Jong. Castle obviously isn’t thrilled when Kate leaves – Ryan lectures him and says that he needs to give Kate some space. Jong and Beckett head to the shooting range for their girl’s night out.

The next day they get a break in Henry’s murder, Jong pulled the surveillance tapes from Henry’s apartment building. The video shows Henry leaving his apartment the night that he was killed, and when he walked outside someone pulled up in a black SUV and attacked him and kidnapped him. They run the license plates on the SUV and learn that it belong to a drug king pin named Billy Hicks. Jong reveals that Henry used to work for Hicks as an enforcer, and that was why he did jail time. Kate thinks that the FBI must be investigating Hicks and that was why Glassman met with Henry. They are about to go after Hicks and bring him in for questioning and then the Captain calls them off and says that the FBI is investigating Hicks and they have to stay away from him until after indictments come down from the bureau.

Jong is furious when she learns that she can’t arrest Hicks for Henry’s murder, she slips out of the police station and heads straight to the gym where Hicks is in the boxing ring with some of his guys. She announces to Hicks that she is friends with Henry Graham, one of his men get in her way and she uses some of her martial arts skills on him. Kate arrives at the gym and finds Jong on top of Hicks and about to slice his throat with a broken bottle. Kate intervenes and begins questioning Hicks – he swears that he didn’t kill Henry. Hicks says that Henry came to him for help and asked him for half a kilo of cocaine. Hicks says that the night that Henry was killed they gave him the cocaine and dropped him off at an address in the city. He gives Kate the address in the city – and she calls it in to the station so that they can pull the street’s surveillance tapes.

Ryan and Esposito find a 2013 X5 parked on the street where Henry was dropped off – it belonged to a wealthy business man named Jeffrey Waldow. It turns out someone planted half a kilo of cocaine in the car, and Wadlow is currently in booking at the police station. Kate and Jong visit Wadlow, he swears he has never heard of Henry, he thinks one of his competitors must have hired Henry to frame him.

Kate and her team do some digging and learn that the Chinese restaurant that Henry ate at every day was n a bidding war with Wadlow over a property in China Town. The owner of the restaurant, a woman named Ming who told the police Henry was her “number one customer” is actually super shady and involved in human trafficking from China and she forces slaves to work at her factory and restaurants. Castle thinks that Ming hired Henry to frame Wadlow, and then killed him to keep him quiet.

Kate and Jong head to the restaurant to talk to Ming, they learn that Henry was in love with one of the slaves working at the restaurant and he agreed to frame Wadlow in exchange of her freedom. The girl, Sue Ying says that one of the other workers gave her a message saying that Henry cancelled their date at the park. They talk to Mae Woo, the girl that gave Sue Ying the message and realize that she grew up with Sue and didn’t want her to leave the restaurant with Henry. Mae was so upset about Henry and Sue running away together – that she went to the park and killed him so that he couldn’t take her away.

Kate and Jong say their goodbyes and Jong heads back to San Francisco. Kate heads home with Castle and she makes a list of all of the things that she wants to accomplish next, she says that it is time for her to find a new mountain to conquer.