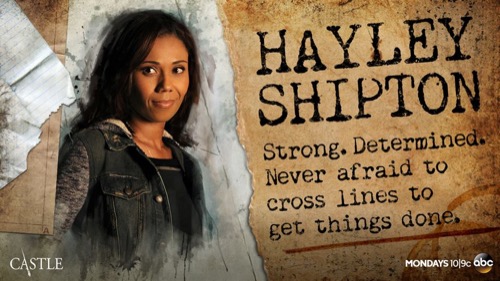 Tonight on ABC Castle starring Nathan Fillion continues with an all new Monday September 28, season 8 episode 2 called “XX” and we have your weekly recap below. On tonight’s episode In the conclusion of the eighth-season opener, Beckett’s (Stana Katic) disappearance is examined from her angle as she fights to stay alive and uncover who wants to see her demise.

On the last episode, when Marco was captured by Toffee and held for wand-ransom, Star entered into an unlikely alliance with Ludo and Buff Frog. Did you watch the last episode? If you missed it, we have a full and detailed recap right here for you.

On tonight’s episode as per ABC’s synopsis, “in part two of last week’s Season 8 premiere, Beckett’s side of her abrupt disappearance is revealed. After receiving a mysterious tip from her past, Beckett is launched into a fight for her life, with a team of mercenaries hot on her trail. While Castle investigates why his wife is on the run, Beckett must figure out who wants her dead, before they can finish the job.”

Tonight’s episode of Castle kicks off with Kate and her accomplice Vikram hiding out in an abandoned building – she thinks they are safe, the NYPD just raided it a week ago for drugs. They head to bed – Kate goes in the bathroom to check on her wound, little does she know there is a team of men sneaking in to the building where she is hiding armed with assault rifles. They storm the building and Kate tries to make a run for it – she and Vikram escape in to the basement. They’re cornered, just as they are about to be shot to death a woman comes out of nowhere and saves them. She introduces herself as Rita, and says she is Castle’s step-mom and then she whisks them away in a getaway car.

Meanwhile, Castle and his daughter Alexis are trying to put together the pieces and figure out who is after Kate. They know it must have something to do with Castle’s time at the AG office. Hayley arrives and says that she has come to help Castle find Kate – she has some feelers out, and has contacted all of her contacts in transportation to search surveillance.

In the car, Kate demands to know who Rita is working for. Kate is skeptical, she didn’t even know that Jackson was married. Rita refuses to tell her what agency she is from – she says she has come to save Kate and that is all she needs to know. She orders Kate to fill her in on where it all started. Kate explains that she got a phone call before work from Vikram – he told her to rendezvous at the hill theater and come alone. She arrived at the theater and met Vikram, he told her that her entire former team is dead – they were all murdered and someone tried to kill him too. While they were talking, men arrived at the theater with guns and Kate and Vikram made a run for it. Kate got injured, but they made it out of the theater alive.

Vikram explains that a search that Kate did 2 years ago just came back and revealed there was a high-profile meeting between Senator Bracken and a well-known political official. Kate is confused, she ran the search when she first started at the AG office, and never got a hit. Vikram explains, “Well you just did, and five people are dead because of it.”

Castle, Ryan, and Esposito got their hands on security footage of Kate visiting Bracken in prison. She tells him that she knows all about “Loksat.” Bracken freaks out and tells her that since she knows about “Loksat” – her life is in danger and so is his. Castle and Kate’s team scramble to try and figure out what Loksat is, they are certain it will help them catch the guys that are trying to take her out.

Meanwhile, Alexis is working with Hayley – they got a lead, someone spotted Vikram at a hotel. She calls Castle, and he orders her to go home, he doesn’t want her involved in all of this. Alexis disobeys, and she and Hayley head to the security office to look at the video footage. Vikram is inside on his laptop – trying to hack in to the file about Bracken. Kate is waiting for him outside in the car. The team arrives to kill Vikram, and he slips out the backdoor unharmed. Kate and Alexis are able to get the images of Vikram’s computer off from the security footage.

Rita takes Vikram and Kate to a safe house in Westchester. After they get settled in – she receives a phone call, Bracken was murdered in prison. Rita tells Kate and Vikram that they are in serious danger, and this is bigger than all of them – she tells Kate that her life is over as she knew it, she is going to have to go on the run and assume a new identity, indefinitely.

Alexis and Hayley take pictures of the files they got from the security camera to Castle, he tells them they have to keep it a secret. Esposito video calls Castle in his office, the assistant AG is there with him at the police station. She warns Castle that the man named Vikram that is on the run with Kate is “up to no good.” Apparently, Vikram faked documents to get in to the agency, and they think that he may be working with the enemy.

In Westchester, Kate and Vikram inform Rita that they are not running, they want to fight the enemy head on. Rita tells her that she is a brave woman, and leaves her card. She tells Kate that if she needs her, to call the number and say that she needs her “curtains cleaned” if she is ever in need of her help again. Kate and Vikram get to work trying to figure out what Loksat means – they put two and two together and think that it is an airplane. They head to the airport, they think that the CIA has been flying drugs on a private plane named Loksat. Castle figures out what Loksat means to – and he rushes to the airport to tell Kate that Vikram is the enemy. He arrives just in time to see Vikram pulling a gun on Kate while her back is turned to him – and he rushes across the hangar to save her.

Castle and Hayley save the day, they knock the gun out of Vikram’s hand. Castle tells Kate that she can’t trust Vikram. Kate doesn’t want to hear it – she says that Vikram is on her side and she believes him. Kate and Vikram head home with Castle now that the Loksat mystery is solved. Castle scolds Kate for hiding everything from him. She reminds him that last year he disappeared for 8 weeks, and she got over it. Castle tells Kate that from now on they are a team, and they can’t keep any more secrets from each other.

Kate and Vikram brief Esposito and Ryan about the CIA drug smuggling, Kate explains that they need to “work outside the system.” They plan on finding the leader of Loksat and exposing them. Once they are exposed, the CIA won’t be able to come after Kate anymore. While Kate and Castle are planning to go on live television in the morning and expose Loksat – the hit team arrives to kill Kate. Ryan and Esposito shoot the killers with stun guns, and knock him out. They think they will be able to use him for leverage and hack his phone. Their plan goes awry when Hayley shows up with another one of the killers – she was taken hostage. Castle uses his hidden gun in his desk to save Hayley and take out that killer.

Kate hands over the men that they captured last night to the attorney general Hyde, she promises Kate that they will thoroughly question the killers and get to the bottom of the Loskat mystery – it will only be a matter of time before they learn who the leader is. Kate is safe for now, she heads to the precinct for her first day of work. They all celebrate. Then Vikram barges in, he tells Kate that the number that kept calling the killers’ phones was AG Hyde – they just handed the killers back to their own boss. She is the one who is behind Loksat.

Kate, Esposito, and Ryan head to Hyde’s hotel room – they hear a gun shot and rush inside. It looks like Hyde committed suicide and killed herself, she shot herself in the head. Vikram can’t believe that it is all finally over. The next day Hayley visits Alexis to tell her “goodbye.” She tells Alexis that it was a pleasure to work with, and they promise to keep in touch with each other. Rita tracks down Kate as she is getting in to her car to go home, she tells Kate that Hyde was just a scapegoat. But, Kate shouldn’t worry about it right now – she needs to go home to Castle.