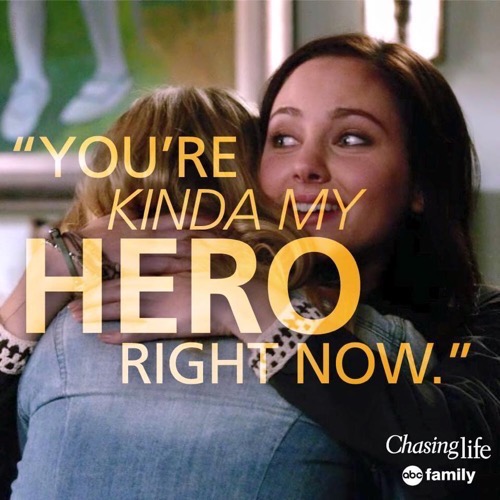 Chasing Life returns to ABC Family tonight for an all new Monday March 16, season 1 episode 20 called “No News Is Bad News,” and we have your weekly recap below. On tonight’s episode, April’s [Italia Ricci] workplace becomes competitive, prompting her to contemplate the importance of her career. Meanwhile, Sara [Mary Page Keller] cleans out Thomas’ [Tom Irwin] belongings in Florida; and guilt weighs heavily on Natalie [Jessica Meraz] and Dominic, [Richard Brancatisano] so they decide to stop hiding their romance.

On the last episode April and Beth confided their doubts about each other’s boyfriends and decided to arrange a double date to get to know the guys better. April tried to hide her disappointment when Leo pulled away from the cancer support group while Beth and Graham found themselves at odds over a recent big decision. Dominic got closer to Natalie after learning they shared a sentimental connection, but Natalie worried about what April might think. Meanwhile, Sara wanted to keep her latest fling easy and uncomplicated but then learned something shocking about her lover. And, after a fight with her mother, Greer turned to Brenna for support. Did you watch the last episode? If you missed it, we have a full and detailed recap right here for you.

On tonight’s episode as per the ABC Family synopsis, “The new pick for Editor In Chief at The Post comes as a surprise to everyone, and the pressure is on for April not to let her new boss down. As the competition heats up at work, pitting April and Danny against each other for the next big scoop, April starts to wonder if she is willing to sacrifice everything for success in her career. Meanwhile, Sara is faced with having to sort through Thomas’ belongings from his house in Florida, but she uses it as an opportunity to reach out to Natalie, and to George. Natalie and Dominic feel guilty about their secretive relationship, and they resolve to come clean to April.”

Raquel, once April’s biggest problem at work and now an occasional friend of hers, has been chosen as the new Editor In Chief at The Post on tonight’s all new episode. And so when she first heard the news, April was actually pleased about it. She knew that instead of big money thinkers, an actual journalist was going to be navigating things. Raquel is both professional and truthfully she’s been running the show there at the office for quite some time now. So an official promotion was essentially going to be like every other day. At least for the people that were working there.

But despite her expectations, April didn’t know how much Raquel was going to push her.

Raquel has noticed April has lost her drive and before that was one of April’s best qualities. So she told April to get her gear into shape. Yet April didn’t realize how much of transition she’s made since she was initially diagnosed until one of her supposed friends at work almost stole a story from right under her.

Before cancer, that was how her relationship with Dany worked but afterwards he generally went easy on her. So what he did came as kind of shock. And we all know what happens after April feels betrayed – she takes it out on the people that care about her.

Hence, it might not have been such a good idea on Natalie’s part to start seeing her half-sister’s ex behind her back.

Regrettably, Natalie and Dominic’s relationship isn’t just bunch of casual hook-ups. They seem to really like each other and she’s been spending an awfully lot of time at his place. So much so her roommate/ April’s best friend has even begun to notice.

Beth and Graham had sadly ended things last week so she has a lot of free time on her hands. And occasionally she still forgets her key to the apartment. So when her roommate stays out for all hours of the night – Beth is the first one to know. And lately she’s been asking questions. Sometimes even in front of April and Leo.

And because of that, April has grown curious as well. She eventually did beat Danny in the scoop of the day but her victory ended on a sour note when he accused her of needing to be the center of attention.

So April was going to cancel the drinks she had planned with Natalie in order to beat him on another scoop yet Leo somehow convinced her to make that date with her sister. Meaning April walked away from a story and risked displeasing her boss in order to hang out with Natalie. And thus she wasn’t in that forgiving of a mood when the penny finally dropped for her.

Natalie confessed to everything, including the sneaking around part, and April basically made her feel like crap. She implied Dominic would never want to seriously date someone like Natalie and after already sacrificing one relationship for April – what Natalie could have had with their dad – Natalie said she didn’t want to do it again. So she’ going to be with Dominic and there’s nothing April can say that will stop her.

Meanwhile, Sara is thinking about paying George a visit. Their relationship didn’t work out the first time seeing as everyone had felt she was still living in the past with her dead husband but she feels like she could be friends with George if not romantically involved one day. Apparently she just cleared out her husband’s old locker with the help of her mom and Natalie so she is taking steps to move on.

However, she wasn’t as strong as she felt.

Brenna too realized she was going to have to let Greer go. But unlike her mother, she went through with it. You see Greer’s parents split up and her father was actually doing much better without her mother around. So he asked her to move in with him and Brenna knew that letting go of Greer was the best thing for her.

So she let her girlfriend move to Nantucket and she promised to stay in touch. But April’s doctor has just found out that her numbers have continuously slipped since she left the hospital. And that means the cancer is back!