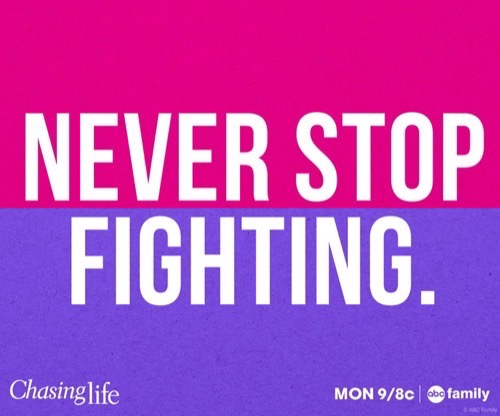 Chasing Life returns to ABC Family tonight for an all new Monday July 27, season 2 episode 4 called “Truly Madly Deeply,” and we have your weekly recap below. On tonight’s episode, an unpublished novel written by April’s dad may hold clues about her family’s past, so April uses it to do some investigating.

On the last episode, standing in April’s shadow, Brenna stifled her true feelings as she left Charton and turned to Natalie for support. Meanwhile, Dominic attempted to rebuild a relationship with his mom; and April went wedding-dress shopping. Did you watch last week’s episode?  We did and we recapped it right here for you.

On tonight’s episode as per the ABC Family synopsis, “April and Leo are in the throes of wedding planning and coming at crossroads when Sara suggests they take a newlywed quiz to help them learn more about each other. But instead of bringing the two closer together, the quiz proves that the two aren’t truly being honest. This is a hard blow for April as she is also dealing with the realization that her father might not have been the guy she thought he was.”

There’s a questionnaire invited by psychologists that was supposed to help couples learn how to better communicate and on tonight’s episode of “Chasing Life” Sara felt like her daughter and future son-in-law were just the couple in need.

However, Sara didn’t how bad things have gotten between April and Leo. For while the couples clearly loves each other – they sad truth is that they couldn’t be any more different. And that became even more abundantly clear what with all the wedding planning.

April wants the traditional wedding and her groom wants to go slighter edgier. She was a few lines from her favorite book to be read at their wedding and he wants to quote Savage Garden. But this April and Leo. These two are not going to fall apart because of the stress of wedding planning.

So if there was anything that was bound to hurt them then it would be their secrets.

April did not tell Leo about her sister finding their dad’s old manuscript. And then she compounded the lie when she didn’t tell him the truth about why she needed to visit a little old B&B in Providence.

Leo thought the trip was going to be for them. In other words a nice little romantic vacation from all the stress. And maybe they could even do the questionnaire. But April you see wanted other things. She wanted to meet the man that was helping her father on his manuscript because apparently her dad wrote about all of them in his book and the way he portrayed April was more than harsh.

In the book, he’s a spy in the 80s and he tells his eldest daughter that she couldn’t be a spy because he secretly felt like he inflated her ego to such her extent that she believed she can do more than she can actually can. So when April read that part it reminded her of when her dad convinced her to go into journalism rather than try to be like him – a writer.

And so April needed to know more about her man yet the only person that had answers was this Ed guy in Providence.

So she lied to Leo to get him to come with her on this “mission”. And when he found out what she did, he was hurt. Which in all fairness was only natural.

At the very least, he thought his future wife should tell him when she’s freaking out or need his help. Yet April didn’t do any of those things. Instead she lied and manipulated. And she made him feel like he wasn’t all that important to share with.

Though, speaking of sharing, Brenna found out that she had taken on too much by dating an older woman. Margo was fun and she was just as interested in film as Brenna was. But Brenna crazy ex-girlfriend wasn’t the one that was stalking them.

That was Margo’s ex, Juliet.

Juliet followed them to the coffee shop and later she showed up at Brenna’s home after having tracked Margo’s cell phone. So this woman clearly had issues. And the teenage Brenna shouldn’t be caught in the middle of it.

A fact she was very well aware and which eventually led to her breaking up with Margo.

And April found out the truth but it didn’t help her any. She learned her dad was manipulative and that in the last year of his life he went full on Hemingway. Meaning there is a chance he could have killed himself. Yet, despite all of that, April is still sad.

She wanted her dad to walk her down the aisle and now the truth has ruined what could have been. However there were a few things that Ed told her that she wanted to look into. He said the last year had really changed her father and that it was like Thomas was a whole new person.

But the second thing he told her was that she had real talent and that he believed she could become a writer.

So the trip wasn’t all for nothing and once she started telling Leo everything – they grew even closer. She shared her secrets and he shared his. And in the end he helped her mourn her dad just a little less.

And that’s why when they got back, April was finally able to find her dress. She decided on wearing her grandmother’s down the aisle and the last we saw them Sara, who has finally started to get back out there and enjoy a social life, was teaching her daughter how to dance in her wedding dress.