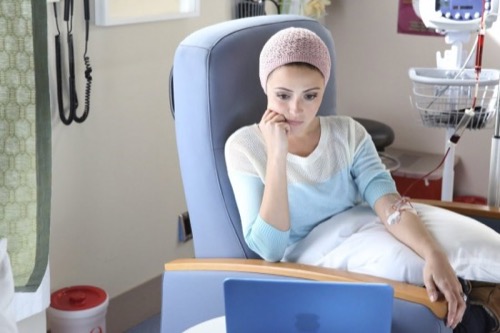 Chasing Life returns to ABC Family tonight for an all new Monday July 6, season 2 episode 1 premiere called “A View From the Ledge,” and we have your weekly recap below. On tonight’s episode, in the second-season opener, April adopts a new outlook on life and tries living in the moment as she plans her engagement party.

On the last episode, April was blindsided by bad news but fights to maintain control over her destiny and to stay strong for her family. She also learned that The Post was cleaning house, but despite her determination to keep her job, extenuating circumstances kept her head on the chopping block. Meanwhile, Brenna learned she was a bone marrow match for an anonymous patient. Did you watch the last episode? If you missed it, we have a full and detailed recap right here for you.

On tonight’s episode as per the ABC Family synopsis, “in the second-season opener, April adopts a new outlook on life and tries living in the moment as she plans her engagement party. Elsewhere, Natalie discovers her dad’s hidden manuscript, which could greatly impact the Carvers.”

Tonight’s episode of Chasing Life kicks off with April lying in bed and dreaming about being at work before she found out that she had cancer, Raquel storms in and demands to know where the research is that she asked for. April wakes up and realizes that it is all a dream and she is in the hospital getting chemotherapy. Leo climbs in to her hospital bed with her, and they fantasize about their wedding. Dominic walks in and Leo jumps out of her bed – Dominic gives her a teddy bear and April awkwardly tells him that she and Leo are engaged.

Sara and her mom are scrubbing the entire house – Sara rants that it has to be completely disinfected before April gets home from the hospital. Leo and April arrive, April and Leo fill them in on their wedding plans after April’s transplant. Brenna is thrilled, but April’s grandmother thinks that they are out of their minds and it is just the chemotherapy talking. April invited Leo upstairs with her. Her grandma complains to Sara that April is rushing and making a huge mistake. Sara points out that the wedding is giving April hope and something to look forward to during her chemo, Sara doesn’t think that April is actually going to through with it.

Meanwhile, upstairs Leo gives April his great grandmother’s engagement ring, his parents are throwing them an engagement party later in the week. April heads out and shows Beth her engagement ring she raves about how much she loves it. Beth apologizes for not making it to the hospital – but she has been looking at dresses for her. April is worried about Dominic, she hasn’t talked to him since she told him that she was going to marry Leo.

Sara, Leo and April head to the doctor’s office to get her test results back. Sara is shocked to hear that Leo’s parents are planning an engagement party for them. The doctor arrives and has bad news for April, the chemotherapy didn’t work and she is not in remission. So, she can’t get a bone marrow transplant. Sara has a meltdown, and Leo takes her up on the roof to get her mind right. He explains to her that she needs to live every day like she knows that she is going to die.

Sara heads home and spends some time with her little sister Brenna – she shows Sara the new footage that she did in film club. Brenna shows her a girl named Erica on the video, she’s a lesbian too, but Brenna doesn’t want to hook up with her. They talk about the stem cell donation that Brenna is doing, she admits that she is a little bit nervous about it.

Later that night Sara rushes over to Dominic’s house. She tells him that just because she is marrying Leo she doesn’t want to lose him – and hopes that he will stay in her life. Natalie is at Dominic’s house, and she convinces Sara to spend the morning with her. They go for a walk in the park, and Natalie convinces Sara to stop worrying about what people think and she starts dancing in the park to the music that the homeless people are playing on buckets with sticks. Natalie laughs hysterically and shouts that Sara is “ridiculous” as she tapes her dancing on her cellphone.

April heads back to the doctor’s office, she meets a girl named Vanessa getting chemotherapy. They start chatting and get to know each other, Vanessa tells April she doesn’t want to know about her job – she wants to know who she is. April feels uncomfortable, and says she needs to prepare for her interview and turns to the side and begins reading through paperwork.

Sara meets up with Leo’s parents to discuss Leo and April’s wedding. Sara thinks that they might be rushing in to it. Leo’s parents explain that when Leo was terminal he did a lot of crazy things. Sara is in denial, she says that April is going to be just fine and she is not acting out because she is terminal, she just has a minor setback.

April heads to an interview that Danny set up for her at a website. Afterwards, April books a party bus and invites all of her friends to ride around town with her to celebrate. She explains that they aren’t really going anywhere, she just always wanted to ride around in a party bus and she figured that now was as good as time as any. Dominic is on the bus, and he brings up his first date with April. IT gets awkward and Leo starts bragging about his first date with April when they stole a car. Dominic snaps back that Leo loves “stealing things.”

April heads back to the doctor’s office, and runs in to Vanessa again. She brings her laptop along to work while she gets chemo. Vanessa explains that when she found out she had cancer, she realized that her career didn’t matter anymore. She started being selfish and travelled to 19 different countries and has visited every single state in the United States. April turns in a list at work as her first piece, “37 Things April Carver Wants To Do Before She Dies,” she heads home and tells Beth that she isn’t working at the website anymore. She has decided that she wants to do something that matters with her life, or travel.

At the engagement party, Leo introduces April and her mom to some of his family. April announces to her mother that she got fired at her new job. Sara drags her out of the party and rants that she is not dying and she needs to stop living so recklessly. April explains that she doesn’t want her old life back, she refuses to live the rest of her life being the “safe girl,” and she doesn’t want to die with regrets. She begs her mom to accept that, and stop being sad. They head back in to the engagement party and Brenna shares a video that she made for April, and it even shows a clip of her dancing in the park.