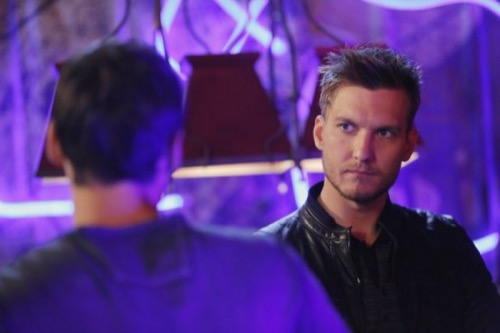 Chasing Life returns to ABC Family tonight for an all new Monday August 3, season 2 episode 5 called “The Domino Effect,” and we have your weekly recap below. On tonight’s episode, a bachelorette party is held for April, [Italia Ricci] and Vanessa [Krysta Rodriguez] convinces her to make it a wild night.

On the last episode, April and Leo were in the throes of wedding planning and coming at crossroads when Sara suggested they take a newlywed quiz to help them learn more about each other. But instead of bringing the two closer together, the quiz proved that the two weren’t truly being honest. This is a hard blow for April as she was also dealing with the realization that her father might not have been the guy she thought he was. Did you watch last week’s episode?  We did and we recapped it right here for you.

On tonight’s episode as per the ABC Family synopsis, “a bachelorette party is held for April, and Vanessa convinces her to make it a wild night. Meanwhile, April prepares to say good-bye to living at home; Brenna contacts Finn; and Dominic arranges for April to meet his book agent.”

On tonight’s episode of “Chasing Life” everything seemed to be going well in April’s life. For once, that is!

She was getting married, she had decided to write her first book, and her best friend in the world was throwing her a bachelorette party in which they could have both fun but still invite her mom. So April was set by this point. And if nothing had changed then it would have been easy journey to the wedding.

Yet, as she should probably have learned by now, such good luck was never going to last for long. And sadly first blow came not long after she was introduced to a publisher by Dominic. Dominic, if you recall, had already published a book so he knows how hard it is to get started and offered to help to set up a meeting between her and his publisher.

But the publisher turned down every idea that April had so far come up with. So that ended up hurting her pride some.

Her ideas weren’t exactly trivial to her. In face they were probably what she’s been thinking about for weeks. Possibly years. And they were just dismissed right off the bat. As if the idea had be overdone.

And after the publisher fell through, so did the wedding band. That’s why April asked Leo and Leo’s best man who is technically a woman Frankie to handle it. Only those two looked and couldn’t find a single band that could replace the one that had booked in advance.

That’s wedding bands for you. So Dominic stepped up again and he solved the couple’s dilemma. He found a band that doesn’t traditional play at weddings and thus were available at the last minute to do this favor for him.

And Leo was upset.

He didn’t say he was upset but he was and his best friend could tell. Though that didn’t seem to matter to Frankie when she decided to throw the guys together. See Leo and Frankie later went to go check out the band and, while they were there, Frankie had the idea to throw him an impromptu bachelor’s party. With Dominic still in the picture.

So you would think she was the one that was asking for trouble. Yet the person that landed up in jail ended up being April and her grandmother.

April got too handsy with the strippers at her bachelorette party and her grandmother tried to sexually harass an officer that stepped in. So both grandma and granddaughter wounded up in jail. And had to be bailed out.

But their time in the pokey got them talking. Emma was earlier asked by her boyfriend to go traveling with her and so she broke up with him because she couldn’t leave when April was still sick. And once Grandma Emma told all of this to April – April felt incredibly guilty.

She didn’t want Emma to pass up on a chance to be happy. Nor did she want her grandmother waiting around for what could be years as she tries to get better. That is if she gets better. So April convinced Emma to go.

And you know what – that gave her an idea for her book.

April decided to write her own memoirs and, though she couldn’t use the publisher that Dominic recommended, she knew that she wasn’t going to change her mind. However Dominic couldn’t be around to help her with her book. He was kind of nursing a black eye that he didn’t want April to know about.

So, yes, Dominic and Leo did get into a fight. But Dominic shouldn’t have said that he still loved April and wanted her back. That is something that wouldn’t have pushed any groom over the edge.

And so tonight’s episode had two silver linings. April figured out her genre and little sister Brenna finally made a friend at public school.