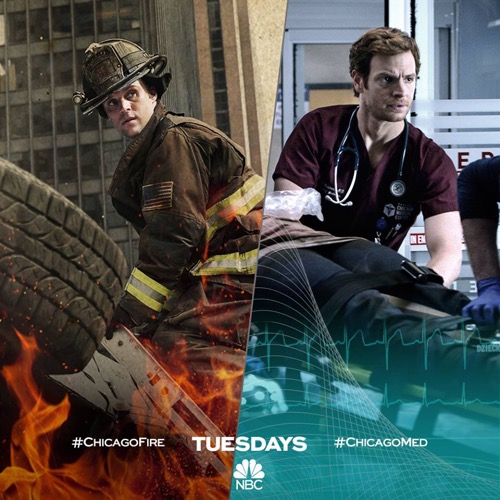 Tonight on NBC Chicago Fire returns with an all new Tuesday, November 17, season 4 episode 6 called, “2112” and we have your weekly recap below. On tonight’s episode, Boden’s (Eamonn Walker) new neighbor asks him for a favor that could have serious repercussions; Severide (Taylor Kinney) is upset when he’s treated like a candidate by Patterson. (Brian White)

On the last episode, Boden offered to host a wedding at the firehouse after a fire destroyed the original location, but it doesn’t sit well with Chief Riddle, who also butted heads with Dawson over her ability to perform. In other events, Severide fought for his old position; and Capt. Patterson found himself torn between leadership and his colleagues. Did you watch the episode? If you missed it we have a full and detailed recap, right here for you.

On tonight’s episode as per the NBC synopsis, “Boden’s new neighbor asks him for a favor that could have serious repercussions; Severide is upset when he’s treated like a candidate by Patterson; and Cruz is visited by a gangbanger who knows his brother. In other events, the team responds to a call that involves an 18-wheeler; and is thanked with tickets to see Rush.”

Tonight’s season 4 episode 6 looks like it is going to be great and you won’t want to miss it, so be sure to tune in for our live coverage of NBC’s Chicago Fire.

Tonight’s episode of “Chicago Fire” opened with bang. Apparently a fire had spread before a mother and child could get out so the woman tried to do the next best thing by taking her child to the roof. That way neither of them would have had to suffer from smoke inhalation.

However the fire had still been too out of control. So the woman then did something drastic that she hoped would save her child if not her own’s. She threw the infant off the ledge to the Firefighters waiting below. And luckily Casey caught the baby before the little boy could be hurt.

His mom on the other hand still needed to be rescued. Therefore the ladder had been taken out and, while it was slow-moving, it did manage to reach the mother in the nick of time.

So all in all it was a job well done but for some reasons Patterson still didn’t seem all that happy with his team. He has them running drills at every chance they could get and right after they answered an emergency call they had also been back at doing drills. And so there could only be one explanation for that – Patterson was already tried to show Riddle his that leadership skills were up to par. You know in case Riddle hadn’t been joking around about a Chief position opening up.

Though in the meantime those drills weren’t doing Patterson any favors at 51. In fact it could be said that his leadership had won him some enemies. For example, his own team didn’t like him because of those drills so that made Casey feel like he should step up and at least try to act as a mediator by telling Patterson that it was ok to ease up on the guys after a while. But Patterson had dismissed Casey, quite rudely by the way, and so that made Casey dislike him as well.

And as it turns out there was an all-important downside to the way Patterson was running thins. For if his guys didn’t like him then they soon found it hard to follow/ respect his directions out in the field. Which was ended up happening with Severide. Severide had openly questioned Patterson’s decision on the scene of a nasty accident.

One guy had swiped a motorcyclist and had run over another prior to hitting a second car. So it was the CFD’s job to try get everyone out of their vehicles as safely as possible. Yet the bikers hadn’t been all that happy about their friend’s situation and thus they started a small riot in order to get to the driver that had run over said friend.

And though the scene hadn’t started out as riot, it had been fraught when Severide questioned his superior officer. So Patterson felt like he finally had enough afterwards and asked Chief Boden if he could transfer Severide out of Squad Three. But Boden wanted to know why Patterson had it out for Severide.

Sure Severide questioned a decision yet Boden had felt as if Patterson had ever given the other man a fair shot. So he told Patterson that he could kick Severide off the squad though he made sure that the other man knew that Severide wasn’t actually going to go anywhere. He said Severide was going to stay in-house and he meant it.

Although Boden had had enough on his plate. A woman had Airbnb the house next door and for some reason she was going out of her way to sleep with him. So something about the situation felt off and he had warned Donna about it as well.

And it looks like someone had been setting him up because after Boden was done telling Donna about Serena – the police showed up at his door asking him if he had kicked down Serena’s door and he confessed that he had. At the time she had sworn she had smelled gas but really she had just wanted to place him inside of her apartment. So that later her accusations of rape would seem more plausible.

But Patterson had still found a way in the end to suspend Severide and so maybe Otis had a point when he asked Patterson what he was really doing to the house. Because now it feels like he’s been helping Riddle destroy from the inside.

Meanwhile an old friend of Otis’s brother had come looking for him and it seems the kids wants a way out of the gang life. So what will Patterson do with that information seeing as been using everyone else’s personal lives against them!