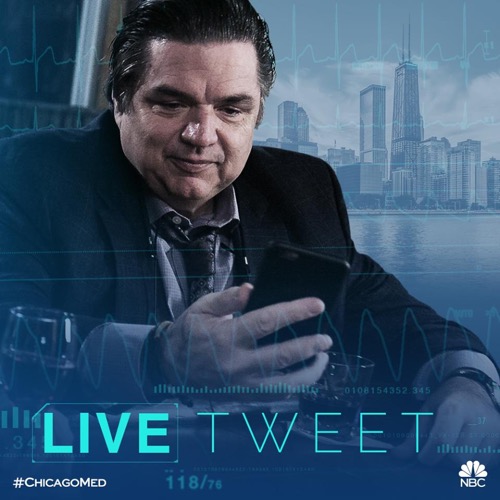 Tonight on NBC their new medical drama Chicago Med returns with an all new Tuesday December 8, season 1 fall finale called, “Mistaken,” and we have your recap below. On tonight’s episode the doctors treat victims of a movie-theater shooting as Sharon Goodwin (S. Epatha Merkerson) tries to keep the press at bay. Also: A teen with an eating disorder is treated, but Dr. Charles’ (Oliver Platt) methods rub others the wrong way; and the staffers deal with a racist patient.

On the last episode, Dr. Rhodes had to confront his past when he treated a close family friend who’s been impaled by glass in a case that reunited him with his sister. Meanwhile, a musician had to decide to undergo surgery that would save her life but could destroy her hearing. Did you watch the last episode? If you missed it, we have a full and detailed recap right here for you.

On tonight’s episode as per the NBC synopsis, “after shots ring out at a movie theater, the Chicago Med doctors work to treat the victims while hospital administrator Sharon Goodwin (S. Epatha Merkerson) attempts to keep the press at bay. To treat a teenager with an eating disorder, Dr. Natalie Manning (Torrey DeVitto) enlists the help of Dr. Daniel Charles (Oliver Platt), but his unorthodox methods rub Natalie and the teenage girl’s mother the wrong way.

Tonight’s season 1 episode 4 is going to be exciting. We’ll be blogging it right here for you. In the meantime hit up the comments section and tell us your thoughts on this new show and enjoy a sneak peek of tonight’s episode below for your enjoyment!

There was a reported shooting at the nearby movie theater on tonight’s episode of “Chicago Med” and so the hospital staff were expecting to see an influx of victims.

However what they got on their hands were people that had gotten injured trying to run out of the theater. And the only person that was actually shot was in fact the alleged shooter. So that was a mystery that was best solved by the Chicago PD.

And what they found out was that Peter Wallace had been merely a stupid teenager. A teenager by the way that had gone to the movie theater in hopes of pulling off a great prank. Which involved using a leaf blower to frighten the crap out of everyone in the theater.

Yet, in a darken movie theater, a leaf blower could look like a semi-automatic and that’s what it was mistaken for. So a mild mannered teacher who had been there had gone on to take out his own gun. Where he then shot Peter because he was afraid for his life.

And for a while the teacher had received accolades. It was like everyone wanted to be his new friend suddenly he was a hero. But then the truth came out and it was then hard on Miller to live with what he done.

Peter hadn’t been killed outright but he did a new liver in less than a day if he were to survive. So it had looked like he was going to do anyways and Miller couldn’t live with that. So he left the hospital as soon as he could meanwhile Peter’s doctor (Connor) was still trying to find a way to help Peter. As it turns out he scrambled for a liver until he came across the Simms family.

Lucy Simms had been trampled to death because of Peter’s stunt and yet she was the best match that happened to be conveniently at the hospital. So Sharon spoke Lucy’s widow and somehow she was able to get him to overlook what Peter had done. She had reminded him that Peter was only a kid and he had parents that would mourn him.

So Peter was going to get his liver but Miller hadn’t known that. And that’s why Miller had jumped in front of a car.

Unfortunately Miller died from his wounds though the media couldn’t stop themselves from reporting Miller’s last words. They were “it was an honest mistake” and truth be told it really was. But Miller had shot an unharmed kid so all anyone wanted to talk about was another guy that was quick to pull the trigger.

The press continued to vilify him and the only person that seemed to regret what happened to were the same people that treated him at the hospital. There, they had seen how hard Miller had taken the news about it all being a prank. And they had wanted to help him.

But they couldn’t help someone that refused to accept it. And as for the media, they had found another person to turn into their hero. Where once they applauded Miller, they now applauded Lucy Simms’s husband for forgiving the kid that had gotten his wife killed.

Then again, though, they still hadn’t gotten the story right.

Bill Simms had donated his wife’s liver to Peter but that wasn’t a magnanimous gesture. In fact he did it as a way for Peter to never forget what he did. And just in case Peter thinks he’s going to get off lightly – Bill also promised to follow his every step for the rest of his life because of what he did to Bill’s family.

So as you see it wasn’t a particular forgiving move on Bill’s part. Although it did give him an audience with Peter when he then was able to make his threats in person. Nevermind that Peter had been surrounded by his parents and had still been hooked up to tubes.

And moving on, despite dealing with their own patients for the majority, Will and Nat simply kept on running into each other. So much so that it couldn’t be fate and Nat’s friends had a point when they said they feel a thing between the two. Though Nat denies it, it isn’t everyday that a male “friend” offers to be there whenever she goes in labor. Even if it’s in the middle of the night.

So it does look like Will might be interested but after he had to deal with a racist patient that turned out to be part black herself and she had to deal with a teenage girl with overbearing mother – they both attempted to downplay what was happening as a way to decompress from the rest.

And therefore they’re going to continue to be only “friends” until one of them makes a move. You know like Connor did with Dr. Sam Zanetti. A woman who is technically a superior of his but he hadn’t let a little thing like that stop him.