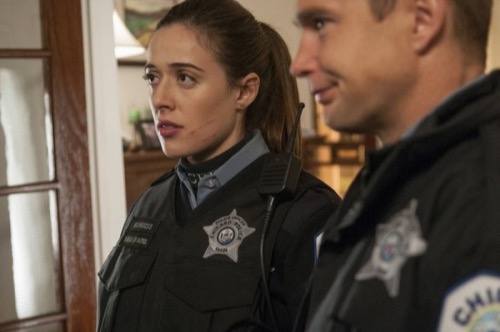 Tonight on NBC their riveting police drama Chicago PD continues with an all new Wednesday January 21, season 2 episode 12 called, “Disco Bob” and we have your weekly recap below. On tonight’s episode, complicated clues surround the murder of a mother and her daughter. Meanwhile, Lindsay [Sophia Bush] prepares for an undercover investigation in Bolivia, and it dawns on Burgess [Marina Squerciati] and Roman [Brian Geraghty]  that they need to put the past behind them.

On the last episode, Lindsay (Sophia Bush) had her first case with the task force and realized she needed to call on Voight (Jason Beghe) and the Intelligence unit to assist. Meanwhile Burgess (Marina Squerciati) was back on the job, but relegated to desk duty which allowed Desk Sgt. Platt (Amy Morton) the opportunity to partner up with Roman (Brian Geraghty). Did you watch the last episode? If you missed it, we have a full and detailed recap right here for you.

On tonight’s episode as per the NBC synopsis, “Bob Ruzek (guest star Jack Coleman) is the first to arrive on the scene of a double murder. Intelligence arrives to take over the investigation tensions arise as Bob needs to hand over the case to his son (Patrick Flueger) and Voight (Jason Beghe). Lindsay’s (Sophia Bush) new gig has her planning a trip to Bolivia for an undercover investigation that could be for an extended amount of time. Burgess (Marina Squerciati) and Roman (Brian Geraghty) realize they need to put past events behind them so it doesn’t jeopardize them going forward. Jon Seda, Jesse Lee Soffer, Elias Koteas, LaRoyce Hawkins, and Amy Morton also star. Guest starring David Eigenberg, Bailey Chase, Alex Manette and Patrick Mulvey.”

What’s going to happen now that Lindsey and Jay finally slept together? Well, sadly, the answer is nothing. Nothing is going to be happening for a while at least. For it seems Lindsey is about to go on an overseas mission in Bolivia for a couple of months and that’s kind of pressed pause on anything she might have started with Jay.

Jay took her news as he best as he could but she knew he was burying what he really wanted to say. And yet neither of them wanted to have THAT talk! So they each ignored the elephant in the room.

Lindsey went to work for an apparently new boss who was sprung on her at the last minute meanwhile Jay was working a case involving a missing child and murdered mother. Naturally, the father was at first suspected of the crime but he turned out to have somewhat of an alibi.

Hence, the mother had to be investigated in order to find out if she had any enemies. And it seems she had a long list of them. Especially as Lucy Denton worked in investigative journalism and she loved going after both small and big cases of corruption and fraud.

Yet, whoever broke into her place to kill her had also killed her daughter and ended up taking her son (that evidence proved was injured in the scuffle) so that team doesn’t exactly have the time to go down a long list of suspects. Though starting with the guy the responding officer, “Disco” Bob (who’s also Ruzek’s dad), kept catching at the scene of the crime didn’t hurt.

The man turned out to be a business owner Lucy has exposed. And he then went on to claim to have only followed her in hopes of catching her in her affair. It seems he wanted to expose her to her husband and get revenge that way instead of murder.

But thankfully, it was later shown Jordan hadn’t in fact been kidnapped. He was just scared kid that hid in his older sister’s favorite hiding place which turned out to be a deserted home a couple of houses down. He was injured but Roman and Burgess found him in good condition.

So that left the cops with the question of how to break the news to Jordan’s father? Because, after they started to look into Lucy, they found out her husband had a life insurance policy out on her that would have paid off all the debt he and his wife and reaped.

The Dentons were broke and the husband had been laid off from his high paying job a year ago. So, as he was working meaningless temp jobs, his wife had filed for bankruptcy. And if her husband turns out to be as vain as Voight thinks – he might have killed his wife rather than face being embarrassed by his money issues.

And before the Dentons lost most of their money, they used to donate and co-chair a lot of charities. One of them being a place where recent parolees could find work.

Hence, Intelligence believed they knew where Wes Denton got his gun for hire and they all they needed to complete the picture was to identify the shooter. And that’s where Jordan reentered the picture.

The little boy is the only witness the police have and once he looked through a couple of photos – he was able to pinpoint. So all that was left to get the shooter to turn on Wes Denton. He’s the one Voight wants to catch the most. And, frankly, some have a problem with the way Voight is handling the case. Like, Disco Bob for instance.

Ruzek’s doesn’t like dirty cops and truthfully he didn’t like his son working for Voight but he warned the other man not to lead his son down the wrong path. And admittedly, Voight already has.

He was so focused on persecuting Wes Denton, he completely overlooked the real perp. It seems the daughter’s boyfriend just wanted to scare Shelby so that she would go back to him. So he hired a known crook and told him he could take whatever jewelry the Dentons.

But the boyfriend hadn’t known the Dentons were broke. So his plan failed and he got his girlfriend killed in the process.

Voight did apologize to Wes and finally reunited a father with his son. Though, his day wasn’t all bad. After everything had finished up at the office, he returned home and was surprised in the night by a visitor.

Lindsey wants to come back to Intelligence. She realized the task force she had joined was all politics and after she had refused to have dinner with her new boss – he basically tried to treat her as a rookie. So now she wants to come back! And possibly ruined whatever chance she and Jay had going or them!