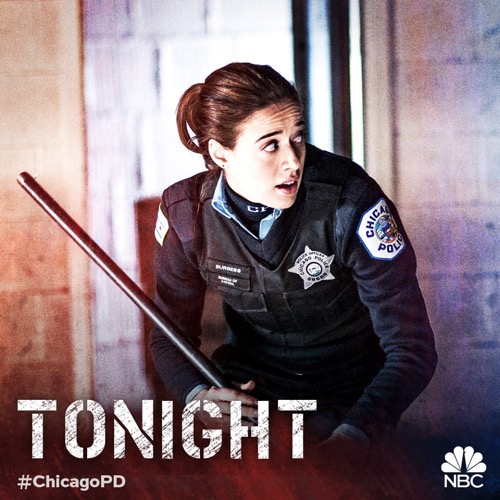 Tonight on NBC their riveting police drama Chicago PD continues with an all new Wednesday February 18, season 2 episode 15 called, “What Do You Do” and we have your weekly recap below. On tonight’s episode, Burgess and Roman get trapped with no means to defend themselves or communicate for help when investigating a perilous smuggling operation.

On tonight’s episode as per the NBC synopsis, “Burgess and Roman get trapped with no means to defend themselves or communicate for help when investigating a perilous smuggling operation. Meanwhile, a slow day finds the Intelligence crew receiving taser certification.”

Burgess feels like she’s been in a rut ever since she turned down the job to go work in Intelligence on tonight’s episode of “Chicago PD”. And she doesn’t know what to do about it. At the time, when she had rejected that golden opportunity, it was because she knew her partner still needed her on the beat. You know, working alongside him. But Roman is fine now and so now she’s wondering if she flushed the only chance her career had to flourish down the toilet.

Hence Burgess wasn’t in the right frame of mind, and was looking for some type of meaning in her job, when she spotted some odd behavior while she was out patrolling the streets with her partner. Subsequently, she had seen a man carrying around a gun and rather than follow proper procedure – she had rushed onto the scene looking for excitement. And unfortunately for her that’s exactly what she found.

By time they had chased down her suspect, one man was shot and neither her or Roman had even gotten the chance to radio it in before a gun was pulled on both of them.

Soon after that, they were stripped of all their weapons and Roman was then taken hostage. And, well, none of this would have happened if Burgess had just done her job like she was supposed to. Yet, even after one blunder led to her partner’s getting taken – Burgess continued to act instead of think and that only led to her eventually capture.

Because when her partner was taken, Burgess didn’t simply run for help or return to the squad car. She just chased after Roman and whoever had him. So she ended up going into a building without weapons or backup. And that’s how she found herself being held at gun point yet again.

As for back at the station, everything is going along as relatively normal as possible so no one has wondered where Burgess and Roman are. To them, it’s a slow day and on top of that the Intelligence unit have to do taser certification. Meaning Burgess’s boyfriend is even too busy to worry about her.

Ruzek only began to grow concerned when she didn’t return his phone calls to see if they could reschedule their date. So his desperation came from the fact he thought she was mad at him and was silently taking it out on him. And he started to suspect there might be danger when he asked Platt where she was yet Platt didn’t know where her officers had gone off to.

So, with the sudden turn of events, Ruzek reported to his boss this bad feeling he was having. However right after they showed up at the warehouse Burgess and Roman were last seen approaching – he ended up missing all the good bits.

Because Burgess, oddly enough, saved herself and her partner. It seems that once she got the upper hand she used it to her best advantage to take down a secret smuggling no one had known was operating in Chicago. So not only did Burgess get Roman’s undying gratitude for saving his life inside the warehouse (more than once mind you), but the Chief also came down from his office to personally shake her hand.

Apparently, after the drug dealers started to turn on each other, Burgess managed to ensure her partner’s safety and was even prepared to kill for him even though she had the chance to leave him behind. So loyalty like that got her a standing ovation from the rest of the cops on patrol.

But, and probably most importantly, Burgess didn’t feel like she deserved to be rewarded. She did after all remember her mistakes and what they had nearly cost her. So Ruzek had to hold while she cried it out. And once she felt better – she finally chose to come out of her rut.