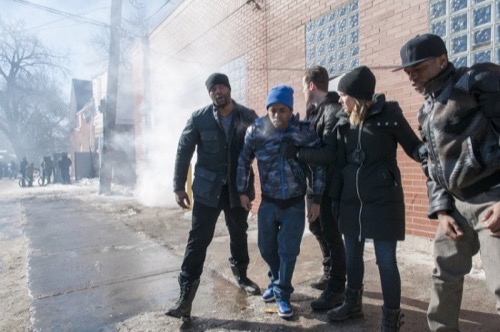 Tonight on NBC their riveting police drama Chicago PD continues with an all new Wednesday April 1, season 2 episode 19 called, “Get Back to Even” and we have your weekly recap below. On tonight’s episode, the investigation into a drug robbery gone wrong uncovers Voight’s [Jason Beghe] link to a missing teen; the real reason for Halstead’s [Jesse Lee Soffer] brother’s visit becomes clear; and Platt cares for a young girl at district.

On the last episode, with a World Trade conference in Chicago, all members of intelligence were undercover in various protest groups to determine potential threats. Ruzek (Patrick Flueger), infiltrated the Black Grid group and befriended Sierra (guest star Lucy Blehar). When she ended up dead, intelligence was suspicious of an Argentine Secretary, Fabian Sosa (guest star Gary Perez). Voight (Jason Beghe) and Olinsky (Elias Koteas) questioned Sosa about the death and the team enlisted Mouse (guest star Caleb Hunt) to help with their tech needed in tracking Sosa. Meanwhile Halstead’s (Jesse Lee Soffer) brother, Dr. Will Halstead (guest star Nick Gehlfuss) showed up in town for an undetermined amount of time and is already stirring up trouble. Did you watch the last episode? If you missed it, we have a full and detailed recap right here for you.

On tonight’s episode as per the NBC synopsis, “Intelligence responds to a drug robbery gone wrong and in their investigation it’s revealed that the first person Voight (Jason Beghe) ever gave his card to is linked to a double murder. Voight will fight to keep her family safe. At the same time, we learn the real reason why Halstead’s (Jesse Lee Soffer) brother Will (guest star Nick Gehlfuss) came to Chicago. Meanwhile Desk Sgt. Platt (Amy Morton) takes care of a young girl at district. Also starring Jon Seda, Sophia Bush, Patrick Flueger, Elias Koteas, Marina Squerciati, LaRoyce Hawkins and Brian Geraghty.”

Tonight’s episode of Chicago PD kicks off with a car accident on a snowy night – the car came back stolen and they think it was a truck jacking gone bad. The cops find a body, it belongs to a gangster named Darius. They open the back of the truck and stacks of buckets fall out on to the snow. The buckets are full of frozen strawberries with drugs inside them.

Aaron and Jay head to the victim’s house – a little girl named Denise answers the door and she says that Darius is her brother. No one is home, but she lets Erin and Jay in to look at Darius’s room. She says that her brother was there a few hours ago with a guy named Andre – they were yelling and Andre had a gun. Jay finds a business card in a wallet that belongs to a guy named Charles, it’s from the Chicago PD. Erin and Jay take the wallet back to Voight – he says that he has no idea who Charles is, he has never heard of him and he isn’t in the gang database. Erin looks skeptical – like she doesn’t believe him. In the lobby Diane is waiting for her aunt to come pick her up, she explains to Trudy that her aunt is always late because she is on drugs.

Burgess and Roman are heading out on duty – it’s Dakota’s first day riding along with them. While they get ready to go out on duty Voight visits a woman named Michelle, he tells her that they found Charles’s wallet at the apartment of Darius, who was just shot dead in a drug deal gone bad with a truck that was carrying $2 Million in heroin. The woman doesn’t want to hear it – she isn’t buying it, she says that Charles just got his life together and got his license and had an interview.

Back at the station, Erin is trying to figure out what happened. She thinks that Darius, Andre, and Charles were following the truck and protecting it. Then it was jumped by the Mexican cartel and Darius and Andre were killed trying to protect the shipment. Voight argues that there was no way Charles was involved with the drug deal – but he won’t tell them how he knows that, or how he knows Charles.

Ruzek and Jay check in to the truck that was carrying the drug shipment – they get an address where the truck came from and visit the warehouse. There are kids riding around on bikes, they can tell that Erin and Jay are cops and their cover is blown. Atwater, Erin, and Jay head in to the warehouse – the kids inside whine that they have to get out of there as Atwater is cuffing them. Suddenly the building goes up in fire and they realize that the door locked behind them – apparently the warehouse was booby-trapped. While the building is going up in flames, Jay and Erin manage to kick out a window fan – Jay climbs through the window and rushes around to unlock the door and they all get out in the knick of time.

Trudy is back at the police station – she calls Diane’s aunt and leaves her a voicemail telling her that she was supposed to pick her up four hours ago. She threatens to call child protective services. If she doesn’t come pick Darius’s sister up.

The kids from the warehouse are brought in for questioning. Jay demands to know who Charles is to Hank – he reveals that Michelle was his informant 20 years ago, she has always doe good by Hank because he saved her life many years ago. In the interrogation room Ruzek and Atwater question the kids from the warehouse – they reveal that Andre and Darius and “some other dude” robbed the truck that they were supposed to be protecting.

Out in the patrol car Dakota is riding around in the back seat of Burgess and Roman’s car, she whines that they are taking all the lame calls because she is in the car doing a ride-along. Burgess tells Dakota to stay in the back of the car, and they head in to a house to investigate a noise complaint. They find two people inside the house hogtied with tape over their mouths. While Dakota is sitting outside she sees two men dressed in black slip out the back door of the house. She jumps in the driver seat of the police car and cuts off the robber’s van with the car. They pull out a gun and shoot at her through the windshield.

Olinsky and Jay visit the truck drive Aaron MaCentire’s house and talk to his son Keith. Keith says his dad is at a hunting cabin in Wisconsin, while they are questioning Keith Mouse calls them and tells the that he looked at the layout of Aaron MaCentire’s house and there is a bomb shelter in his back yard. Olinsky finds the door to the bomb shelter and heads downstairs – he finds Aaron hiding.

The cops bring Aaron in for questioning, he explains that the Mexicans approached him and he was broke. He agreed to drive their shipments and he insists he had no idea what was in the back of the truck. Aaron says that he didn’t kill Darius and Andre. He picked up the drugs in Texas and they put a crazy Mexican in the truck and said he was there for security. When Andre and Darius tried to rob the truck, he shot and killed them – he says Charles ran away before he was killed.

At the police station Diane’s Aunt finally shows up and is obviously high – Trudy refuses to let her take Diane. Jay find a photo of Charles online and he is throwing up gang signs. He shows the picture to Voight, and he is furious. He heads to Michelle’s house and demands to know why she lied to him and said that Charles was clean and a good kid. She insists that the picture was like three years old and Charles was “just messing around.” Voight shouts that he has his whole team putting their necks on the line and searching the city for Charles – and if she is lying to him then she is in trouble.

Burgess and Roman head back to the police station with Nadia, Fisher stops them in the lobby and shouts at Nadia to get in his office. Trudy rants to Burgess and Roman that she is sick of them destroying cars, and running up bills. Roman scoffs that it isn’t their fault – the action finds them.

Aaron Macentire goes through the mugshots and IDs the Mexican shooter, hes a gunman named Octavier Ramirez. Jay gets a phone call from Michelle, Charles is at her house. Voight rushes over there and finds that Charles was shot during the shootout. He cries to Voight that Darius and Andre made him come along and they said that if he didn’t drive the truck they would kill his mom. Michelle says that they need to get Charles to the hospital – Voight reminds her that if they do Charles is going in the system. Voight calls Jay and an illegal doctor named Will to Michelle’s house – while they are stitching up Charles the Mexican killed Octavier shows up at the house to finish the job. Jay runs upstairs to take down Octavier while Will tries to stitch up Charles’s artery. Will tries to hide Charles in the basement but Octavier follows him down there, Voight takes Octavier down in the knick of time and shoots and kills him.

Erin comforts Nadia back at the police station, Nadia thinks that she blew her chance and Fisher is never going to let her train to be a cop now. Erin reassures her that this is all going to blow over. Child services shows up for Diane, Trudy hugs her goodbye and tells her to be brave.