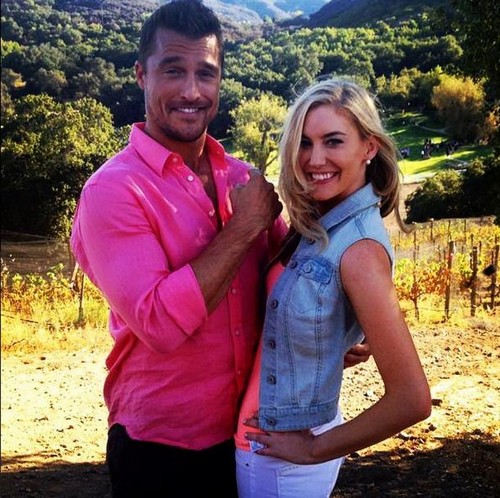 The Bachelor stars Chris Soules and Whitney Bischoff are on the verge of a break-up, despite their PDA-filled lovefests and bragging about their engagement on social media and in interviews. When Chris Soules left his family farm in Iowa and joined The Bachelor – he got a taste of Hollywood, and has no intention of returning to his mundane life. The last thing Chris Soules want to do now that he is a bona fide celebrity is settle down and marry Whitney Bischoff.

Chris Soules and Whitney Bischoff’s showmance was working out beautifully – neither of them wanted to return to being Average Joe’s, and they were loving all of the attention they were receiving. But, Whitney Bischoff is getting fed up, and is tired of sitting in the audience and watching him parade around on the Dancing With The Stars stage. She is coming to the startling realization that no one really cares about her or what she is doing – and Chris is clearly the star of their showmance.

Despite the fact that Chris Soules has made it very clear that he and his fiancée have not set a wedding date and do not plan to any time soon – Whitney has begun bragging about her “farm wedding” plans to anyone who will listen. According to sources close to the Chicago nurse, Whitney is determined to get married and be a bride, regardless of whether or not Chris Soules is on board. The 2015 Bachelor winner has realized that she actually holds the power in their showmance, and if their engagement falls apart Chris Soules’s image as The Bachelor will too. So, he has no choice but to show up at her farm wedding – or else he can kiss his new found celebrity status goodbye.

We have seen it over and over again in previous seasons of The Bachelor and The Bachelorette, the media follows the new couple’s moves incessantly – but as soon as they break up, they fade in to obscurity. Whitney knows that the last thing Chris Soules wants to do is fade into obscurity – so if The Bachelor wants to keep his newfound fame, he is going to have to walk down the aisle and say “I Do” to Bischoff.

Do you think that Chris Soules will cave and marry Whitney so that he can remain relevant? If they break-up instead of getting married, will Chris Soules fade in to Bachelor obscurity? Would you consider what Whitney is doing as blackmail? Let us know what you think in the comments below and don’t forget to check CDL tomorrow for more Bachelor spoilers and news.