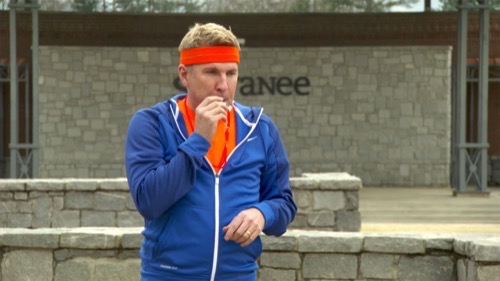 Tonight on USA Network their reality show Chrisley Knows Best returns with a two episode premiere with an all new Tuesday June 9, season 3 episode 3 & 4 called “Getting Testy; My Chrisley Valentine.” We’ve got you recap down below! On tonight’s episode Savannah wants to go to college a year early, but Todd would rather she stay home; and Todd serves as Chase’s ACT coach.

On the last episode, in the season 3 premiere, a magazine asked the family for an interview about fashion. Todd insisted that everyone followed a script of his creation, but his plan didn’t work quite as intended; Todd stepped in as coach of Grayson’s baseball team, but as soon in over his head. Did you watch the episode? If you missed it, we have a full and detailed recap right here for you.

On tonight’s episode as per the USA Network synopsis, “Savannah wants to go to college a year early, but Todd would rather she stay home; and Todd serves as Chase’s ACT coach; Todd teaches Chase a lesson about respecting women after he learns that his son is seeing several different girls.”

Tonight’s episode is going to be filled with drama and you won’t want to miss it, so be sure to tune in for our live coverage of the show tonight at 10 PM EST! While you wait for our recap hit the comments and let us know how excited you are for “Chrisley Knows Best” season 3!

The kids are growing up on tonight’s episode of “Chrisley Knows Best” and it seems they can’t wait to leave home.

Savannah has taken all the courses she’s needed in order to graduate early and the one thing standing in her from actually doing so is her dad. Todd doesn’t want his little girl to grow up too fast. But luckily he also can’t resist a challenge.

Savannah and Chase told their dad they should be rewarded for get high scores on their upcoming ACTs. And from that suggestion, that he was never going to agree to, Todd came up with a game of his own. He was going to help Chase practice for the test and if Chase got a higher score than his sister then he can finally get that dog he’s always wanted. And Savannah had to give up on graduating early.

However Savannah was going to receive help as well. And if her mother helped her score higher than her brother then Todd has to agree to let her graduate early. So it was guys vs. girls and the one rule they had in place was that neither could have outside help.

But Todd broke that rule right off the bat.

He knew he couldn’t help Chase on his own so he hired a tutor believing she could kick his son into shape. And instead of taking his lessons seriously, Chase tried to flirt with his tutor. Thus Todd later had to find even more underhanded ways to sink Savannah’s chances.

Though spying on her and Julie’s methods turned out to be a waste of time. For Julie didn’t have any special tricks. She simply found methods to get her daughter relax in-between studying. And she was fortunate to have the one child that did study.

Todd was the one that was stuck with Chase. Todd had even enlisted his own mother’s help yet nothing the two of them did appear to boost Chase’s chances. Because, ultimately, Chase wasn’t going to study until he actually wanted to. And when he did begin to take the test seriously, Todd finally had a reason to be proud.

Truthfully, at the end of the day, Todd does want the best for kids but just the thought that so many of them will be out of the house at one time is what’s got him down. An empty nest is what all parents fear. So that’s why Todd tried to sabotage Savannah.

But Savannah and Julie did end up winning the bet and even though Todd tried to renegade on the deal – Julie told him he had to keep it.

And though he’s worried about the children all growing up and leaving then at least he has Grayson for a few more years. The second grader was left mostly to his own devices and he built his volcano project all on his own. So at the very most there is one child that Todd believes takes after him.

Chase on the other hand is merely in his own category. On the second part of tonight’s episode, Todd found out that his son had been stringing several girls along. And so he enlisted Savannah’s help in teaching his son to respect women.

And Savannah came up with the idea to catfish Chase.

Savannah has a friend that has agreed to let her use her twitter account. And from there, she and her dad set her brother up. They sent him flirty tweets eventually getting Chase to follow “Lia”. Then they made Lia practically irresistible.

Chase had several dates set up for Valentine’s Day and “Lia” just had to interrupt him. In fact, Chase was in the middle of a day with an older woman when Lia tweeted a bunch of flirty message. So Chase chose to ignore his date in order to answer messages.

In the meantime though Todd’s mom Faye was being kind of out there. It seems the older woman had opened a Bed & Breakfast without telling anyone. And when Todd did found out, he asked his mother to close up shop.

Faye however chose not to listen to her son. So she still had a “guest” over when her family came by to have Valentine’s Day dinner. And Todd was no happy.

Earlier he had pulled a stunt on his son Chase with the fake Lia (Savannah in brunette wig) but his mood took a nosedive when he learned his seventy year old mother was still inviting strangers into her home.

He didn’t feel it was safe and he was constantly worried about the people she was meeting. So it looks like he either has to accept her B&B or be the one to provide her gambling money. Faye was only doing all of this so that she could go to the casino.