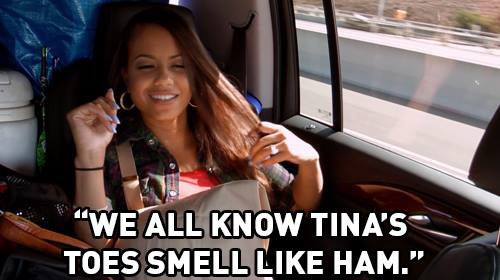 Tonight on E! Christina Milian Turned Up returns with an all new Sunday February 22, season 1 episode 5 called, “Unhappy Campers,” and we have your weekly recap below. On tonight’s show Christina organizes a family camping trip, which seems doomed from the start when tensions build before the group even leave home.

On the last episode, Carmen had a bad feeling about Christina performing “The Star-Spangled Banner” at a Los Angeles Dodgers game, and it turned out for good reason when the singer lost her voice right before the gig. Elsewhere, Lizzy searched for a nice Jewish guy to love. Did you watch the last episode? If you missed it, we have a full and detailed recap right here for you.

On tonight’s episode as per the E! synopsis, “Christina organizes a family camping trip, which seems doomed from the start when tensions build before the group even leave home. Once settled into their campsite, drinks flow and tempers ignite as long-seeded resentments rise to the surface.”

Tonight’s episode is going to be drama packed, which you won’t want to miss. So be sure to tune in for our live coverage of E!’s Christina Milian Turned Up Season 1 episode 5 — tonight at 10PM EST! While you wait for our recap, hit the comments and let us know how excited you are about the new show.

The Milians are going camping on tonight’s all new episode and the only person that appears to be excited about is Christina. Then again it was her idea in the first place. However, this whole camping thing is turning to have been something thought of on a whim instead of an actual thought out plan. And with this family –that wasn’t the smart idea ever!

You see earlier, Christina had put everything in motion when the ladies went out for some light desert. They were talking and having a good time. So Christina wanted to find a way to continue this. And, naturally, she came up with the idea of camping when everyone’s defenses were down at the moment.

To be fair to her relatives, when Christina made her pitch she also made it seem like this family especially needed a trip like this.

At the time she made her proposal, she said she wanted to spend some extra time with her family. She said they were all so career orientated lately and that she missed them. So instead of taking on any other suggestions, like going to a resort for instance, she thought camping would be a great bonding experience.

So the reality of the situation is that Christina essentially pushed this idea on everyone until they agreed to come. But once she had their consent – she then went about being the world’s worst hostess. At least according to the very same people she wanted to spend time with.

Because, while she could get everyone to come camping with her, Christina could also be someone that likes to push the actual work onto everyone else.

In other words, Christina is a slightly pampered brat. And an example of this would be when Christina had everyone else load the car for her even though it was her car. Or another example would be when she took off instantly after everyone else started to work on setting up the tents at the camp site.

But by time Christina returned, after she had disappeared for two hours while everyone else readying up the camp, she seemed to think it was going to be her mom and Danielle that were going to be cooking her fish. So you know what – the other ladies snapped. And they were right to do so.

They were tried of doing all the grunt work and funnily enough Christina didn’t even need to fish in the first place because the family had also packed some supplies before they left the house. So Danielle called her sister out on this behavior as was her right. And surprisingly that ended up as a quickly escalating argument that no one could back out of. Because, even though Christina can dish; she’s not someone used to taking it.