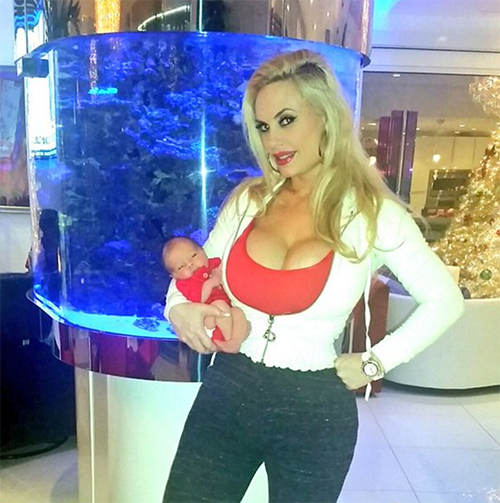 Coco Austin has taken quite a bit of heat from critics who claim the new mom is exploiting baby Chanel Nicole by posting so many pictures but Coco argues that she is just excited and the proud mom just wants to share her newborn with the world.

It’s unclear if baby Chanel’s umbilical cord was even cut before Coco Austin announced her brand new daughter’s own Instagram account to the world. The first photo’s of Coco, Ice T and their new daughter were posted on social media possibly within minutes of when they were taken.

It’s obvious that the reality star and her rapper turned actor husband were so excited to share their new bundle that they didn’t hold back in hopes of a big tabloid payout.

Instead, Coco shared Chanel’s first baby picture to Chanel’s account to point out that her baby had inherited Ice T’s trademark dimple. Then Coco posted to both her own and her baby’s accounts another brand new baby picture with the caption, “Not 10 minutes out the womb and I’m posing.”

The photo was posted the same day Coco’s baby was born and very likely around the same time that the picture was taken.

From there, the proud new mom posted a family photo that included Ice T, Coco and Chanel and she’s been posting pictures like a typical first time mom who is crazy in love with her brand new baby. When Chanel was just four days old, the fitness model turned reality star posted a picture of herself with the baby cradled in her elbow with her huge breasts on full display in a low cut red shirt.

Of course the haters jumped right on that picture and trashed Coco for holding the baby like an accessory when really we suspect most were just shocked by how quickly Austin bounced back.

Most celebrities either don’t post pictures of their newborns at all or they tease with partial pictures, blurry pictures or sometimes just one good photo of the baby to quiet all the noise. That’s not how Coco rolls though and she’s posted pictures of Chanel Nicole with herself, with daddy Ice T and even with their pet English Bulldog.

For all of the proud mama posting, Coco Austin has taken a lot of heat about how much exposure she’s already given her newborn daughter. On Facebook, a user commented, “Coco darling don’t exploit your newborn beautiful lil angel. I say with respect honey.” To which Coco replied, “How is this exploiting her? I’m proud that I’m finally a mama…does she not look happy?”

Just to sidebar for a second, Chanel Nicole is just over a week old. She doesn’t like like anything yet, except her dad. Chanel definitely favors Ice T in the looks department. Anyway, Coco doesn’t feel that she is exploiting her daughter Chanel because she’s not looking to make money off her new little bundle but instead Coco is just trying to show off how proud she is to finally be a mom.

My little miracle! Yes, I’m such a proud mommy!!