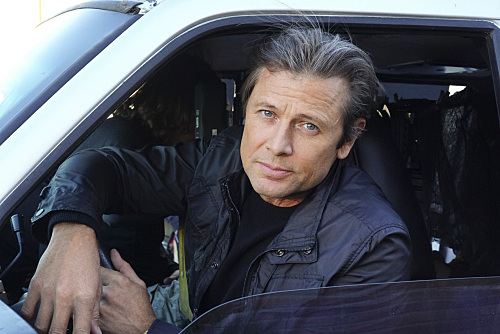 Tonight on CBS Criminal Minds starring Thomas Gibson and Shemar Moore continues with an all new Wednesday January 14, season 10 episode 11 called “The Forever People,” and we have your weekly recap below. On tonight’s episode, frozen bodies are discovered in Nevada floating in water. The investigation leads the BAU to suspect the victims were members of a cult. Meanwhile, JJ confronts some old demons from her abduction and torture last year.

On the last episode, when the BAU was called to Salt Lake City Utah to investigate a triple homicide, the search for a connection among the victims lead them to a fugitive who had ties to the UnSub. Did you watch last week’s episode? If you missed it we have a full and detailed recap right here for you.

On tonight’s episode as per the CBS synopsis, “when frozen bodies are found in Nevada floating in water, the BAU’s investigation leads them to suspect that the victims were part of a cult that could be behind the deaths. Also, JJ confronts old demons from her abduction and torture last year.”

JJ never dealt with her past or the genuine strain of being tortured a year ago. Instead, given the opportunity i.e. friends that are willing to believe whatever lie she’s been telling herself, she’s chosen to ignore her recent behavior and the many early indications of PTSD. And for the most part she’s just thrown herself into her family or her work in order to better hide from her condition. But her latest case has forced her revaluate her life and where it’s going.

On tonight’s episode of “Criminal Minds”, the team was investigating recently discovered dead body that had clearly died from an odd cases of Hypothermia when JJ noticed the victim had a wound stemming from electrical burns – the same kind she now has thanks to the tormentor that had kidnapped her.

Unfortunately, the electrical burns on the victim only makes sense if someone had tried to either resuscitate her which doesn’t seem like an option seeing as her body was dumped so easily or the victim could have been tortured prior to her death. And it’s the possibility of torture that’s getting to JJ. So JJ has been studying their victim who they eventually found out was a single mother by the name of Sara Rhodes.

JJ wants to know what happened to Sara but while she was studying the corpse she caught something in Sara’s medical files. Apparently, Sara’s system had been denied protein and was actually flooded with sugar and electrolytes. Which if you didn’t know was a common occurrence when a person is involved in a cult.

Cult leaders like to practically starve their followers. It helps them remain control over their victims. If people willing joining a cult can even be called victims?

Sara is dead now but her son is most likely still with the cult so this case is about more than just getting justice for Sara. It’s also about rescuing her son before he has to prove his loyalty to the cult leader. The BAU team don’t want that little boy to be “tested”.

The cult leader locks up new initiatives in a freezer and he resuscitates them so that they could be reborn. Though sometimes people don’t always survive the freezer. Case in point being Sara. And as it turns out there was someone else who had been injured during the rebirthing process.

There was once a young man named Tom. Now he survived but he was badly injured after his time in the freezer and after he came out of the hospital – his new “friends” abandoned him. Yet that hasn’t stopped Tom from believing they’ll come back for him. So Kate and Morgan asked them about these people and he gave them the cult’s name.

The cult calls themselves “The Forever People” and they hide themselves by calling each other the Global Warming Awareness Fund.

As they team was readying themselves against the cult, Reid finally addressed JJ’s issues. He wanted her to know she could speak with him if she needs to but she told him to drop it. She said she had made mistakes and now it’s up to her to decide how she chooses to live with them.

JJ was referring to how she trusted her former partner and inadvertently allowed him to kill a woman and her daughter. The deaths of those two is what’s been haunting her and yet she might just end up making a similar mistake. After they had raided the cult, JJ found out one of its members wasn’t a believer at all – merely a concerned father.

Right before she died, Sara reached out to her ex and the father of her son. She told him she needed help getting out of the cult and so her ex said he was going to join up and together they’d form a plan. Yet Sara had been murdered and her ex wasn’t allowed near his son.

So now he’s trying to break his son out and JJ promised him she’d get them both out safely. However, how is she going do that with a serial killer on the loose?

While disgusting and preying on people’s weaknesses, the cult leader did not kill members that wanted to leave. But one of his followers had. Brother John is a sociopath and joining a cult turns out to have been the perfect choice for him because it gave him a ready supply of victims. And also kept him off the grid.

Brother John had later gotten his hands on a man he thought had no right to go looking for the little boy called Bobby. In fact he thought that wasn’t proper behavior for people in the cult. So he was going to kill this man just like he’s killed everyone else. Including Sara!

John was going to freeze Carl to death but in one pivotal moment – JJ managed to stop him.

She had ignored orders and chased after John without backup. And by the luck of the draw – she took him down with one shot. Thus saving Carl’s life and fulfilling her promise to him.

You see Carl was reunited with his son Bobby yet JJ wasn’t validated by what she did. She was just still struggling with her own ordeal so Reid ignore what she said earlier and tried to help. He gave her a file on her captor. He thought that might help her come to terms.