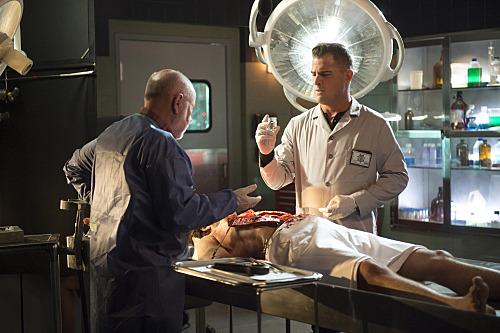 Tonight on CBS CSI: Crime Scene Investigation returns with an all new Sunday January 25, season 15 episode 14 called, “Merchants of Menace” and we have your weekly recap below. On tonight’s episode, the CSIs investigate a homicide that occurs at a convention for people who collect macabre murder memorabilia.

On the last episode, the CSI team learned the main suspect in the gig harbor killings was being released from jail due to lack of evidence. Guest stars included Mark-Paul Gosselaar as twins Jared Briscoe and Paul Winthrop, and Mark Valley as Detective Daniel Shaw. Did you watch the last episode? If you missed it, we have a full and detailed recap right here for you.

On tonight’s episode as per the CBS synopsis, “the CSI team investigates a homicide at a convention for people who collect macabre murder memorabilia.”

Tonight’s episode of CSI kicks off at a serial killer fan convention – an announcer is auctioning off the authentic car driven by a notorious serial killer named Lucas Reem. When they unveil the can from underneath the tarp – there is a dead body in it. The announcer realizes it is his partner Damon and panics and screams for someone to call 911. Russell and Brody arrive at the murder-obilia convention to process the crime scene. They reminisce about the serial killer Lucas Reem that the car belonged to – he was just put to death in prison for all of the girls he raped and killed.

The coroner arrives at the scene of the crime – he says Damon was killed 10 hours ago, at midnight. The cause of death is at least a dozen stab wounds, and he was killed in the car. Damon’s partner is questioned by Russell, he says he hasn’t talked to Damon since last night and he wasn’t answering his phone all day. His partner reveals that Damon had a temper – and he fought with a few of the murder-obilia customers, but he doesn’t think they are dangerous.

Sanders arrives at the scene of the crime, just in time to stop two crazed serial killer fans from taking selfies with Damon’s dead body. He runs their ID’s and they don’t have any priors, he tells them to go back home to Dead Owl Creek. Brody runs fingerprints she found inside of Lucas Reem’s car, where Damon was murdered. They come back as a casino worker named Nora Waters – ironically Nora’s sister was one of Lucas’s victims back in 1995.

Sara brings Nora in for questioning, and she reveals that her sister Rachel hid her in the closet and she watched Lucas Reem butcher her sister through a crack in the door. Sara reveals that she was in love with Damon, they had been dating for the past year. She says that she met him online and he studied Lucas Reem. He raves that Damon was a student and was studying the “darkest parts of humanity.” Nora confesses that yesterday before they put the car up for auction she sat in it with Damon. Meanwhile, out in the waiting room – Ross meets Nora’s father, who wants to know why his daughter was dragged down here for questioning. Nora’s father says that Nora is “fragile” because of what happened to her, and that is why she makes bad decisions like dating Damon.

Nick visits the coroner’s office and learns that Damon was stabbed 11 times with a huge blade, possibly a chef’s knife – just like what Lucas Reem killed his victims with. They find a bone fragment inside of Damon and realize that Damon was actually stabbed with a knife made out of human bone. They run the DNA on the bone, and are shocked when it comes back as serial killer Lucas Reem. Someone killed Damon with a weapon made out of Lucas Reem’s bone.

Brody does some research and learns that Damon was actually selling a knife made out of Lucas Reem’s bone – so someone killed him with his own murderobilia. They decide to head back to the convention and check the table where the knife used to be on display, to see if the killer left behind any prints. Ross decides to work on how Lucas Reem’s bones turned up – he meets with the prison coroner who confesses that he was supposed to cremate Reem’s body, but it was stolen from the lab. He says that whoever stole Lucas’s body left behind a liquor bottle and he hands it over to Ross so they can try to get some prints or DNA off from it.

The prints from the liquor bottle come back as Todd Spanna. He apparently deals in meurder-obilia too, and he wrote a book claiming that he “took down the serial killer” because he called the cops when he saw him washing blood off his hands next door. They bring Todd in for questioning, and he insists that he didn’t steal Lucas’s body, and whoever stole his body framed him and left the bottle there. Todd tells them to check out the blood market, which is an online auction site that sells real murderobilia, the illegal stuff – like bloody weapons and body parts. They check out the site and learn that there are eight other Lucas Reem bone knives – and there is a man who has been searching on the blood market for the knives. They trace the username back to Nora’s Dad Bruce Waters. Meanwhile, Brody comes back with prints from the convention and reveals that Bruce Water’s prints were found on the table where the knife was stolen from.

Bruce Waters is MIA, his wife has no idea where he is. They bring Nora back in for questioning and she insists that her dad is innocent. She says that Damon was helping her dad get the knives so that he could destroy them, she gives them the address where the deal was supposed to go down. Sara and Nick head to the lot, and find a pool of blood – it belongs to Bruce, they check his pulse and he is long dead. They find a gun on the ground, and realize that it didn’t have any bullets on it. They find a weird black string hang hanging out Bruce’s mouth and Sara takes it back to the lab. She learns that it is fringe from a jacket, just like the one in the picture that Lucas Reem used to wear – and it has Reem’s DNA on it. So, whoever killed Bruce and Damon, was wearing Lucas Reem’s coat, because that’s not creepy at all.

Nick calls Todd back in – and wants to know who bought Lucas Reem’s official jacket on the blood market site. Todd says he knows where the murder-obilia people will be partying. Nick goes undercover, and says that he has a piece of the Lucas Reem collection. The bouncer send him upstairs to show the ring leader Gunnar. Nick heads upstairs in to a creepy old house where dozens of people are sitting around looking at bloody evidence and murder weapons. Nick finds Gunnar and shows him the piece he brought – it’s one of the houses from the Miniature Killer. Nick says he is willing to trade it for some Lucas Reem bone-bladed knives. Gunnar introduces him to a man named Jacob who has on the fringe jacket and a case full of bone knives. He holds one of the blades up to Nick’s neck, and Nick bodyslams him and the rest of the police rush through the doors.

They bring Jacob in for questioning – and he begins ranting that he didn’t kill Damon and Bruce, Lucas Reem’s spirit has taken over him. They test Jacob’s coat and realize that it is a fake, and it wasn’t the same jacket that was being worn Damon and Bruce’s killer. The knives that he was carrying around were all fake but one – which actually was made out of a different serial killer’s bones – Gerald Palmer. They trace Gerald Palmer’s body and find out wit was handled by the same mortician they already questioned who tried to pin the body theft on Todd. Ross brings the mortician, Nolan, back in and reveals that they are on to him – and they know that he killed Damon and Bruce and stole the serial killer’s bodies. Nolan says he is innocent, and if they let him walk – he will give them his customer list and who bought the Lucas Reem knives from him.

Sanders recognizes one of the names on Nolan’s customer list – Kyle Jessup from Dead Owl Creek, one of the teens that tried to take a selfie with Damon’s body. He heads back to the convention, and Kyle is still there. Kyle confesses that he wanted to keep all of Lucas’s body parts together and Damon and Bruce were trying to destroy the Lucas Reem memorabilia. They arrest him and bring him down to the police station. Ross meets with Nora and tells her that they caught the man that killed her father and her boyfriend.