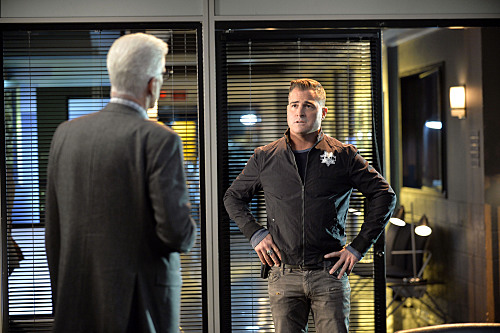 Tonight on CBS CSI: Crime Scene Investigation returns with an all new Sunday January 25, season 15 episode 15 called, “Hero to Zero,” and we have your weekly recap below. On tonight’s episode, the CSI team end up investigating a murder involving a superhero.

On the last episode, the CSI team investigated a homicide at a convention for people who collected macabre murder memorabilia. Did you watch the last episode? If you missed it, we have a full and detailed recap right here for you.

On tonight’s episode as per the CBS synopsis, “The CSI team investigates the murder of a young victim dressed as a superhero.”

On tonight’s episode of “CSI”, a group of men were attacking an elderly homeless man when out of nowhere a Good Samaritan stepped in to save him. However no good deed goes unpunished. And that rule applies even for wannabe superheroes. By the next morning a store owner had found the body of the Samaritan beaten to death. And now the team is on the case.

Their victim was found wearing a costume and the man he saved had honestly thought he was Batman. Sadly, the homeless man isn’t that much help. He appears to be mentally disabled (hence Batman) and he also never saw the assailants’ faces seeing as they kept faces covered up the entire time.

Though, everyone in the neighborhood apparently knows who these people are. A new gang started coming around a few weeks ago and they’re already known to be especially vicious. Security cameras revealed they had broken into a pawn shop the same night of the murder. And there is that assault against poor Roger to take into account.

Yet, their victim was able to at least give a description of one person involved in the gang. It seems he drew his own comics starring himself as the superhero and in one of them – there was a distinctive young man with a purple mohawk. However that same young man while involved in the pawn shop heist wasn’t anywhere near the alley at the time the victim was murdered.

So that leads the team to believe there could actually more than one gang terrorizing the neighborhood.

Not that they were going to tell Brad’s superheroes friends that. Prior to running into the other masked vigilantes – the team was unable to identify their victim. Yet a nice chat with his friends helped them fill in a few blanks. And paint the picture of Brad.

Brad was idealistic. He grew up on comic books and superheroes so when he and few friends realized they could become the stuff of legends – they answered the call to arms. And essentially left their families constantly worrying about them.

Brad’s parents hated what he was doing but they couldn’t stop him. He refused to listen to reason and now he’s dead all because he wanted to save the day.

Later, the team learned that Brad’s beating had nothing to do with his murder. For it looks like someone had beaten him up and then possibly someone else killed him an hour afterwards. So it was actually two crimes they were investigating.

Who was a part of this second mysterious gang and who had killed Brad? And so far the only evidence to help them figure out the answers to those questions was simply one red pickup truck that was seen around the time of the crime.

Brad’s friends, Tina and Scott, were asked about it and they proved to be of little help. Yet, when the team did find out who had owned the truck, they soon suspected Tina and Scott knew who had beatten up their friend and done something in retaliation.

The truck belonged to a man named Tony Agrerro and it’s kind of hard to miss his name when it’s written there on the side of the truck. But that’s not the issue. The real problem came when the squad that was sent to fetch Tony ended up finding his dismembered body.

Tony worked at a construction site and someone and used that against him. Possibly someone with a grudge like the one Tina and Scott had when they figured things out after the cops started asking them about the truck in the first place. However those two eventually alibi out.

And so at first the team was stumped about who else could have wanted to hurt Brad and/or Tony.

Then Roger, the same homeless man from before, came back into the picture. It seems he had found the murder weapon used against Brad and he inadvertently helped point them towards the killer.

Roger had found the weapon in someone’s trash and when the police found out which garbage can he was digging into – they realized someone had sent up a security camera.

And that footage revealed it was Brad’s stepfather that hurt him. As the story goes, Seth wanted to teach his stepson a lesson so he hired Tony and his friends to beat him. Yet when Brad didn’t come straight home – Seth went to go check on him. Then somehow he lent on to knowing about a gang and things went downhill from there.

Brad figured out his stepfather had set him up and because he was going to tell his mother – Seth killed him. Then Seth killed Tony when he didn’t want to pay the agreed amount.

Yet, when asked, Seth swears he’s not really killer. He was just pushed into doing things!