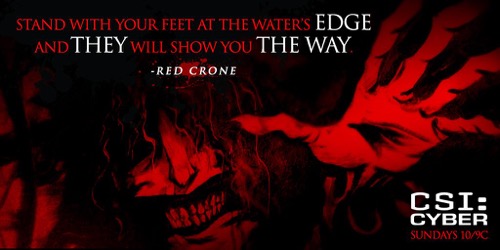 Tonight on CBS CSI: Cyber returns with an all new Sunday October 25, season 2 episode 4 called, “Red Crone” and we have your weekly recap below. On tonight’s episode, the team investigates a child-abduction case based on an online myth in which an abductor lures children through a cell phone app.

On the last episode, a police officer’s body camera was hacked and the incendiary video goes viral. The team investigated to learn the truth and find the hacker before the small town where the cop worked erupted in unrest. Did you watch the last episode? If you missed it, we have a full and detailed recap right here for you.

On tonight’s episode as per the CBS synopsis, “the team investigates a child-abduction case based on an online myth in which an abductor lures children through a cell phone app. Meanwhile, Elijah’s aggressive behavior at work causes Avery to bench him; and romance is the air for D.B.”

Tonight’s season 2 episode 4 episode looks like it is going to be great and you won’t want to miss it, so be sure to tune in for our live coverage of CBS’s CSI: Cyber at 10:00 PM EST! While you wait for our recap hit the comments and let us know how excited you are for the season 2 episode 4.

There were two kids missing in Richmond, Virginia and the agent assigned to their case had a reason to believe that an internet horror Meme was responsible on tonight’s episode of “CSI: Cyber”.

The two brothers by the name of Jacob and Luke Sullivan had become interested in the meme called the Red Crone. Now the Red Crone is just the latest spin on age old myth of an old wise woman with powers. But she’s also the first myth to ever be created completely online.

Someone came up with a theory one day and everyone who had gone to see the meme then added to it. And eventually that grabbed Luke and Jacob’s interest. So Agent Pierce had to go to Cyber. She was told Krumitz was the only one capable of getting information off of the kids’ damaged phone and it turns out he found something much worse than a couple of kids playing around.

It seems the two boys came to believe in the Red Crone and they left a message that they were going to go and meet her. However, as all the adults knew, that was clearly impossible. The Red Crone was merely a myth and so that meant whoever had reached out to the kids was playing on their naiveté for their own agenda. And therefore Krumtiz had a pretty good idea about who was out there pretending to be the Red Crone.

On the boys’ cell phone, there was a picture of the Red Crone and it was obviously infected with malware. So there was someone that was spying on the kids and that’s probably how they received their mysterious invitation. The one they randomly received over a fan site that promised them rewards if they did everything they were supposed to. Like using the app which was another gift to uncover the location of the Red Crone’s mansion.

And unfortunately that’s what the boys did. The boys had been using the Eye of the Red Crone app and what the app did was send the “special” few on a treasure hunt. Using clues that could only be deciphered with the app. Therefore the kids had been falling the clues that they hoped would lead to a dinner at the Red Crone’s mansion without ever guessing that the app had put their electronics on airplane mode thereby making it impossible for anyone to trace their movements.

But luckily the Cyber Unit knew how to decode all of the clues and so they were close onto this Red Crone’s heels.

Avery and Krumitz tracked down the brothers to a fountain and then to a graveyard. And at the graveyard they ran into another young boy who had also been following the clues. His name was Timmy and apparently one of the things he had to do in order to meet the Red Crone was hurt himself.

So by time they found Timmy, he had become a fanatic. He was so far gone in believing the Red Crone that he tried to fight medical treatment. All the while announcing that he was a chosen one and that he needed to continue with his mission.

The trail the kids had to take was consequently designed to enthrall them and make only the truly devoted show up at the door. In fact Avery said it was almost cult like in the way it demanded obedience out of everyone that was deemed chosen. But what made the trail dangerous was that she finally figured what kind of person was waiting at the end.

Avery told her team that they were dealing with noncontact pedophile. Meaning he’s never given into his urges and so he made up the Red Crone app as a way to make the loss of what he deems is his “virginity” special. And thanks to Krumitz and Nelson, they found out their perp’s name was Oliver Crispin. Oliver had been working as a courtroom sketch artist so that’s how he got the skill to draw off the Red Crone’s original image and expanded her world until it fit his criteria.

Though what Agent Mundo will probably remember most is that he had the chance to catch Oliver while the other man finished up a case at the courtroom, but he missed him by a couple of minutes.

For that short amount of time allowed Oliver to escape detection and have enough time with Luke and Jacob. Sadly the two boys showed up at the abandoned theatre and did not question it when an older man that was there demanded they take baths and put on special nightgowns that had their names stitched in. All he had to do was say it was part of the process to meet the Red Crone and they followed along.

So when Mundo found Oliver and the two boys in their nightgowns, he wasn’t Agent Mundo anymore. He was simply Elijah Mundo who happens to be a father and although he stopped Oliver from hurting those boys – he couldn’t stop himself from beating the hell out of Oliver.

Luckily, Avery stopped him from fully crossing the line yet she did reprimand him. She later told him that she was going to be removing him from the field until he cleared whatever was causing his sudden aggression. Because it wasn’t just this case though Oliver’s actions would have pushed anyone.