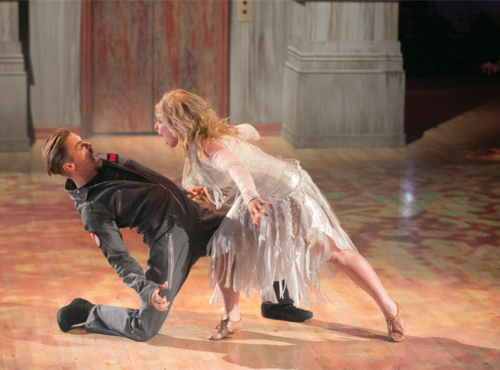 Tonight on ABC Dancing With The Stars 2015 airs with an all new Monday November 2, season 21 episode 8 and we have your weekly recap below. On tonight’s episode, an elimination occurs after the eighth week of performances, which feature the stars honoring influential figures in their lives. Also: one couple receives immunity, and the other six compete in a dance-off.

On the last episode, Dancing with the Stars treated viewers to a thrilling ‘spooktacular’ night filled with scary and chilling performances. The eight remaining couples performed individual Halloween-themed routines in addition to a competitive team dance. For the team dances, the cast was divided into two frightening teams: Team #Nightmare and Team #WhoYouGonnaCall. These two teams competed against each other, vying for a perfectly wicked score from the judges. Actress and “Dancing with the Stars” Season 17 semi-finalist Leah Remini also returned to guest co-host alongside Tom Bergeron. At the end of the night, one couple will faced elimination. Did you watch the last episode? If you missed it we have a full and detailed recap, right here for you.

On tonight’s episode as per the ABC synopsis, “the “Dancing with the Stars” celebrities will pay tribute to influential figures in their lives. The dance styles will include Argentine Tango, Foxtrot, Contemporary, Salsa, Paso Doble and the Viennese Waltz. For the first time this season, the couple with the highest score from their solo dance will be granted immunity from elimination next week and will also receive 3 additional points. For the first time ever, each of the six couples that do not receive immunity will then be paired up to compete in a head-to-head dance-off to be voted on by America in real-time on www.ABC.com and the three judges. The couple with the majority of the four potential votes from each dance-off will earn an extra 2 points, increasing their overall score. At the end of the night, one couple will face elimination.”

Judges Comments: Julianne: “This is definitely in your blood. Salsa is all about being free and that is what it was all about. You just need to watch your hips and be in more control. Great job though!.” Bruno: “Magic Carlos is back! You were tossing Whitney into positions that you cannot find anywhere, I don’t think they were legal, but I liked it a lot. You put a lot of armography into it, I like that.” Carrie Ann: “I actually thought you had a rough start, you kept taking it up a notch but I found a mistake as well. I still loved your connection, it was enjoyable to watch.”

Judges Comments: Bruno: “You were great, but you missed a lift. Overall it was really beautiful, you did well because those lifts were really difficult.” Carrie Ann: “It is about rising to the occasion and I think you did. I didn’t see a mistake, but I think you could have pushed him further.” Julianne: “You need to work with his strength, I would love to have seen more side by side. I wanna see that dancing, more combination, but it was still beautiful.”

Judges Comments: Carrie Ann: “That was great, I felt to much emotion and passion for your mom, it was really beautiful to see. However, I think because you were so entranced that your dancing suffered a lot, you need to go back to basics.” Julianne: “I am going to agree with Carrie Ann on the negative stuff, you are so lovely and the fact that you brought so much joy to everyone, you should be proud.” Bruno: “All the intentions were right, the execution of the Viennese Waltz is exact and your rendition was challenged.”

Judges Comments: Julianne: “There was such an intensity in the groundedness, you had all the intensity even though you slipped up, you kept going.” Bruno: “It was so grandeur, you made a few faults that really stood out. We are there with you all the way, but you did it.” Carrie Ann: “I saw the teeniest tiniest mistakes, but it was still epic.”

Judges Comments: Bruno: “That was a love poem perfectly visualized through dance. The story telling woven into the choreography was brilliant, not a dull moment.” Carrie Ann: “You took my breath away, I have been riding you hard to get one with the dance, tonight that was the best dance ever.” Julianne: “I think you guys are all pretty close, what you did tonight is showed you are a dancer, you have adapted every week but tonight, you are truly a dancer.”

Judges Comments: Carrie Ann: “I loved this night, that was an incredible routine. I think your secret weapon is your energy, from the moment you start until you are done, is full on energy.” Julianne: “Don’t take this the wrong way, I am trying to find something wrong and this time, when you get into your frame your shoulder comes in. But, that is the only thing, work on it.” Bruno: “You win it, you have the gloss and the glamour, you have the Hollywood sweetheart feel, but be careful about your shoulder.”

Judges Comments: Julianne: “You looked stunning and that choreography was the way to showcase the kind of dancer you are, which is a great one. You have to watch your arms though, that is my only note.” Bruno: “Strictly Paso Doble, pure down to the core. All the elements were there, sharp and the flavor of Spain was there.” Carrie Ann: “You are not the only one who thinks you are an incredible dancer, thank you for saying it. You had her in that Paso Doble, but you lifted your foot.”

Nick Carter and his partner Sharna Burgess have the highest score and are granted immunity, the rest of the dancers will participate in the Dance Off.

Bindi Irwin and her partner Derek Hough vs. Carlos Panavega and his partner Whitney Carson dancing the Jive

Judges Comments: Julianne: “Nice strategy, did that pay off. This is the closed I have ever seen, I don’t know what is going to happen.” Bruno: “What a turn of events, that was so thrilling and so unexpected.” Carrie Ann: “I was really impressed, I loved the comaderie at the end.”

Judges Comments: Bruno: “Sexy mamas, what is going on in here? All that sex appeal, it was cheeky but somebody had an edge.” Carrie Ann: “I love the competition factor, girls know how to compete, one of you had more favor.” Julianne: “I felt like I was back in England in a competition, I definitely preferred one more than the other.”

Judges Comments: Carrie Ann: “Both of you need to work on your Samba.” Julianne: “I thought you did a good job.” Bruno: “The Samba is so hard to do but Andy managed to put a bounce in it.”

JUDGES CHOOSE THE BEST COUPLE: Andy & Allison, America gave 54% of the vote to Andy & Allison who win 2 points to add to their total for tonight.