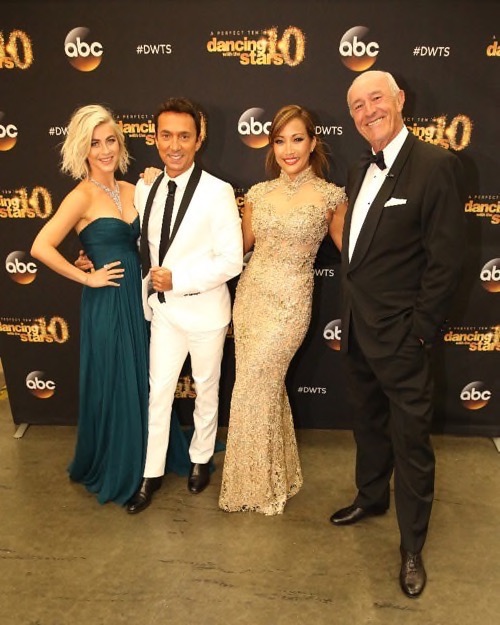 Tonight on ABC Dancing With The Stars 2015 airs with an all new Tuesday May 12, season 20 episode 9B and we have your weekly recap below. On tonight’s episode, it’s the ninth-round results show. Included: Flo Rida performs. Also: a dance in honor of military women; a performance from the stars of “Teen Beach 2.”

On the last episode, four remaining couples advanced to the SEMI-FINALS. The competition was neck and neck as each couple fought to make it to the top 3 and dance in the finale. Noah Galloway, Nastia Likuin, Riker Lynch and Rumer Willis performed two full routines including a Viennese Waltz, Quickstep, Paso Doble, Contemporary and Argentine Tango. Did you watch the last episode? If you missed it, we have a full and detailed recap right here for you.

On tonight’s episode as per the ABC synopsis, “Four remaining couples advance to the SEMI-FINALS. The competition is neck and neck as each couple fights to make it to the top 3 and dance in the finale. Flo Rida will also drop by the ballroom to perform his hit “GDFR” and the end of the night, one couple will go home and three couples will advance to the finals.”

Tonight’s Dancing With The Stars semi-finals results show kicks off with hosts Erin Andrews and Tom Bergeron – they recap last night’s top four dances, and share a clip of contestant Noah Galloway’s marriage proposal to his girlfriend Jamie Boyd. The happy couple joins Tom on stage to discuss their new engagement, Noah laughs that he is glad he proposed on live television because his girlfriend had no choice but to say “yes.” Now, it is time to learn Noah and Sharna’s fate on Dancing With The Stars – based on America’s votes and the judges’ scores – Noah and Sharna are one of the lowest ranking teams and they are in jeopardy of being eliminated. Next, Witney, Artim, Jenna, Lindsay, and some DWTS guest dancers take the stage next and dance to “Summer of 69,” as part of the Almay Simply American Tour to raise money for military families.

Erin Andrew heads backstage to interview the remaining four pro dancers. Sharna discusses her journey with Noah Galloway, she admits it has been different than working with previous celebrities and says that Noah has helped her grow and really push herself creatively. Val has never won a Mirror Ball in the past 8 seasons, and he says that it would mean the world to him to be able to share the victory with his partner Rumer Willis. Derek Hough gushes that all of the celebrities are champions this season – but unfortunately there will only be one winner, regardless of the outcome he says that Season 20 has been amazing. Now it is time to learn Riker and Allison’s fate on Dancing With The Stars – according to America’s votes…Riker and Allison are going to the finals. Nastia Liukin and Derek Hough were given perfect scores by the judges last night, but America did not agree, because they are also in jeopardy of being eliminated tonight.

Superstar Flo Rida takes the Dancing With The Stars stage and performs his hit song “GDFR.” After Flo Rida’s performance, it is time to learn Rumer Willis and Val Chmerkosvkiy’s fate on Dancing With The Stars. According to America’s votes combined with the judge’s scores – Rumer and Val are also in jeopardy of being eliminated tonight. So, either Rumer and Val, Nastia and Derek, or Noah and Sharna will be going home.

Erin Andrews heads backstage to interview Nastia Liukin, Nastia gushes that last night was emotional for her because it was tough to see her partner Derek in pain while they were on the dance floor. She declares that her time on DWTS has “been nothing but great memories.” Tom Bergeron shares a clip of the “highs and lows” that the final four dance teams have had together so far on Season 20. Next, the stars of Teen Beach and Riker’s brother Ross Lynch takes the DWTS stage to perform the popular song “March To The Beat.”

It’s finally time to learn which bottom three couple will be eliminated tonight, and who is going to the finals. According to America’s votes, compared with the judges’ scores – Nastia Liukin and Derek Hough are eliminated from Dancing With The Stars.

Rumer & Val, Noah & Sharna, and Riker & Allison are going to the DWTS finals.