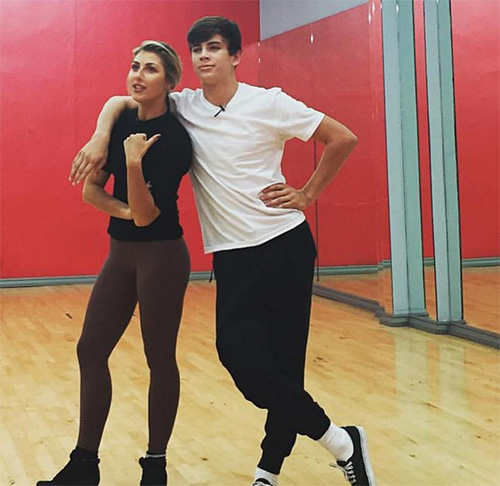 Dancing With The Stars Season 21 spoilers tease that Vine star Hayes Grier will be a frontrunner for the Mirror Ball Trophy during the Fall 2015 cycle. From a distance, Hayes Grier appears to be just a fresh-face teen full of energy with some natural dance talent – but what a lot of people didn’t realize is that the social media guru is only 15 years old. Already a ladies man at just 15, Hayes Grier seems to have his DWTS pro partner Emma Slater, 26 years old, wrapped around his finger.

Hayes and Emma’s uncomfortable flirting during the Season 21 premiere of Dancing With The Stars has once again raised an interesting question: how young is too young to compete on the show? An ongoing theme on the ABC television show is the flirtatious, often hypersexualized, relationships between dancers and their partners; their risqué performances provides evidence of this.

Hayes actually is not the youngest contestant to compete on the show. Last season, Hunger Games actress Willow Shields was paired up with pro Mark Ballas – and that raised a few eyebrows as well. Mark handled the awkward couple like a champ and remained professional throughout their time on DWTS, but all eyes were on him and social media was just waiting for him to slip up and put his hand in an inappropriate place while dancing with Willow. He made it through the situation unscathed though, and tip-toed on eggshells.

Now, this season, we have 15-year-old Hayes Grier and his partner Emma Slater. For some reason, there seems to be some sort of double standard going on, and DWTS fans don’t seem to be batting an eye at Emma and Hayes’ on-screen flirting. When it was vice versa, and Mark was paired up with a 14-year-old girl, everyone was up in arms. And the Dancing With The Stars producers are playing with fire, airing controversial rehearsal clips of 15-year-old Hayes making comments about how big his partner Emma’s butt is. If Mark Ballas complimented Willow Shields’ butt, people would have been lined up outside the studio protesting.

What do you guys think? How young is too young on Dancing With The Stars? Are Emma and Hayes crossing any lines? Is there a double standard regarding girls on the show and guys on the show? Let us know what you think about Hayes and Emma in the comments below!