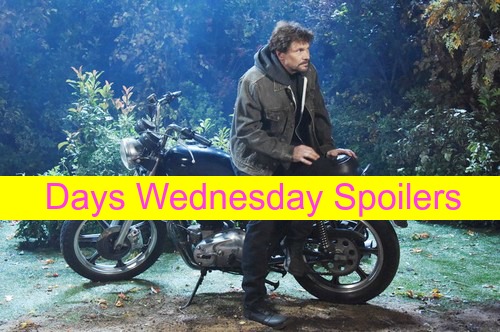 “Days of Our Lives” spoilers (DOOL) for Wednesday, November 4, tease that Steve (Stephen Nichols) and Bo (Peter Reckell) will speed back to Salem as they try to stop Hope’s (Kristian Alfonso) wedding. After surviving a plane crash, Bo managed to get in touch with Caroline (Peggy McCay).

Once they fixed up a motorcycle, Bo and Steve hit the road. Unfortunately, time is not on their side. Caroline will make one last plea to prevent the marriage, but Hope will insist she’s ready to start her new life with Aiden (Daniel Cosgrove).

It seems Steve and Bo are going to be awfully disappointed when they show up in town on Thursday. Of course, Hope has some major disappointment coming up as well. Hope has no idea that her soon-to-be husband plans on strangling her in a couple of hours.

Once Hope realizes she was wrong about Aiden’s motives and Bo’s absence, she’ll have a lot to mull over. DOOL spoilers reveal that plenty of guilt is in Hope’s future. Stay tuned to “Days of Our Lives” to watch Hope deal with all the sudden changes she’s facing.

Meanwhile, Abigail (Kate Mansi) will try to figure out a way out of her latest jam. Ben (Robert Scott Wilson) threw Abigail against a wall and knocked her unconscious. When she came to, Abigail was handcuffed inside a shack in the middle of nowhere.

If Abigail didn’t know Ben was a psycho before, there should be no doubt now. Ben will continue ranting about Chad (Billy Flynn) while Abigail tries to plot her escape. Sadly, it doesn’t look like Abigail is going anywhere anytime soon. Ben has lost touch with reality and he won’t give Abigail up without a fight.

Other “Days of Our Lives” spoilers say Adrienne (Judi Evans) will struggle to let go of the past. When Adrienne sees Justin (Wally Kurth) and Eve (Kassie DePaiva) sharing a steamy kiss, old feelings may come rushing back. Nevertheless, Adrienne made it clear that she thought they should see other people.

Justin has a right to move on just like she’s moved on with Lucas (Bryan Dattilo). Will Adrienne regret calling it quits with Justin? “Days” rumors hint that we shouldn’t count out the possibility of a reunion just yet. Stick with DOOL to see if Justin and Adrienne will eventually realize they belong together.

So “Days” fans, what do you think about the news that Steve and Bo will arrive in Salem? How will Hope react when she gets updates on Bo’s time in captivity? How long will Ben hold Abigail hostage?

Do Adrienne and Justin still have feelings for each other? Let us know what you think in the comments below and don’t forget to check CDL often for the latest “Days of Our Lives” spoilers, rumors, updates and news.