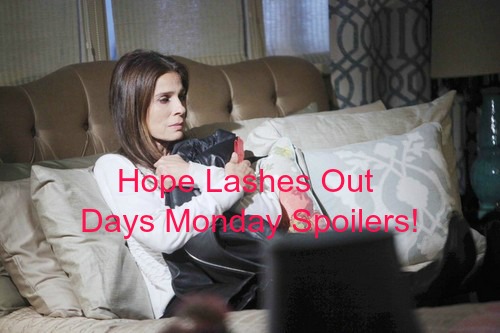 “Days of Our Lives” (DOOL) spoilers for Monday, November 23, tease that Hope (Kristian Alfonso) will try to find a way to cope with her loss. Bo (Peter Reckell) told Hope he had a brain tumor and died in her arms moments later. Hope was heartbroken by Bo’s death, but her sadness will quickly turn to anger. DOOL spoilers say Hope will rip into Steve (Stephen Nichols) and Kayla (Mary Beth Evans) when she discovers they knew about Bo’s condition.

If Hope had known Bo’s health was declining so rapidly, she wouldn’t have left his side at any point during this very long day. However, Steve and Kayla just found out a few hours ago. Besides, they felt Bo should be the one to break the news to his love.

It was a personal issue and Bo wanted to handle it on his own. Hope will eventually forgive Kayla and Steve for keeping her out of the loop, but her anger won’t entirely subside. “Days of Our Lives” spoilers reveal that the DiMeras will soon be the target of Hope’s rage.

Speaking of the DiMeras, it looks like John (Drake Hogestyn) and Marlena (Deidre Hall) will try to make a deal with Stefano (Joseph Mascolo) and Andre (Thaao Penghlis). Unfortunately, things won’t go according to plan. Marlena and John found a flash drive, which presumably contains the pass codes from the Swiss bank. Now they’re probably hoping they can trade all the info for Sami’s (Alison Sweeney) freedom.

It appears Sami doesn’t really need their help. “Days” rumors hint that Sami will give the DiMeras the slip. In fact, we may have already seen the last of Sami’s brief return. Nevertheless, Sami will keep plotting behind the scenes and her family members may get involved as well. A battle is brewing and it could get ugly.

Meanwhile, Abigail (Kate Mansi) will beg Ben (Robert Scott Wilson) to take her to the hospital and let the midwife go. DOOL spoilers say Ben will insist that Abigail is giving birth in that cabin and Wendy (Denice Duff) can handle the whole process.

This baby is coming far too soon and his life could be in danger. Will the child survive without immediate medical attention? Stick with “Days of Our Lives” to see Abigail give birth in difficult circumstances.

So “Days” fans, what do you think about the news that Bo’s death will cause anger issues for Hope? Will Sami make her great escape? Will Chad (Billy Flynn) get updates on Abigail’s location in time for the birth? Let us know what you think in the comments below and don’t forget to check CDL often for the latest “Days of Our Lives” spoilers, rumors, updates and news.