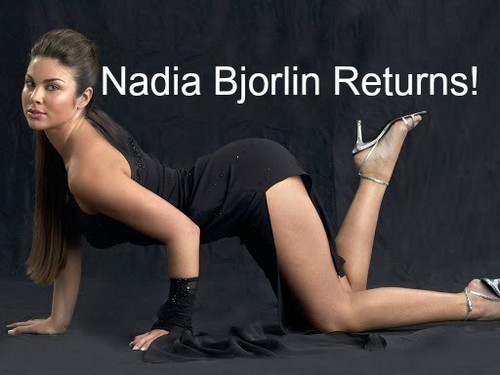 “Days of Our Lives” spoilers reveal that DOOL fans will be seeing a familiar face in Salem soon. According to Yahoo TV, Nadia Bjorlin is returning to “Days” as Chloe Lane. There had been some rumblings about Bjorlin’s comeback after she took part in a few book signings for DOOL’s 50th anniversary.

We now have confirmation that Bjorlin is already taping episodes and is expected to pop up as a series regular around late spring.

By tossing Chloe back in the mix, “Days of Our Lives” will create numerous romantic opportunities. Many fans have been buzzing about the possibility that Chloe could get back together with Brady (Eric Martsolf).

Brady has finally settled down with Theresa (Jen Lilley) and they seem happy in their new home with Tate. Of course, we all know that happiness never lasts long on a soap. Brady might turn to Chloe if his relationship with Theresa falls apart.

There’s also a chance that Chloe could reunite with Philip (John-Paul Lavoiser). Chloe and Philip’s love bloomed when they were young and they reconnected later on. When Chloe was with Daniel (Shawn Christian), she secretly hooked up with Philip and wasn’t certain about Parker’s (Evan and Luke Kruntchev) paternity. Parker was thought to be Daniel’s child, then Philip’s and finally Daniel’s again.

Since Daniel will be killed off, there’s been some speculation that we could see the issue of Parker’s paternity resurface. Could there have been a mistake that would make Parker turn out to be Philip’s after all?

On a show where embryos get stolen and people get brainwashed, another paternity cover-up wouldn’t be too far-fetched. On the other hand, someone like Brady or Philip could easily serve as the young boy’s stepdad or father figure instead.

Whatever happens, Chloe will inevitably be paired with a hunk down the road. Although Bjorlin’s long-term role will begin airing in several months, “Days” viewers will see Chloe appear briefly in January. We don’t know for sure what will bring Chloe back to town, but Daniel’s funeral sounds like a safe bet.

After that, Chloe will probably take Parker back home with her and leave poor Nicole (Arianne Zucker) childless once again. Nicole will be devastated when her new family is suddenly ripped away.

On the bright side, maybe Nicole can sneak in a couple visits with Parker when Chloe moves to Salem in the springtime. Stay tuned to “Days of Our Lives” for updates on Chloe’s future storylines.

So “Days” fans, what do you think about the news that Nadia Bjorlin will be returning to DOOL as a series regular? Will you be glad to see Chloe stick around for a while? What about Bjorlin’s brief appearance in January?

Will Chloe show up for Daniel’s memorial service? Let us know what you think in the comments below and don’t forget to check CDL often for the latest “Days of Our Lives” spoilers, updates and news.