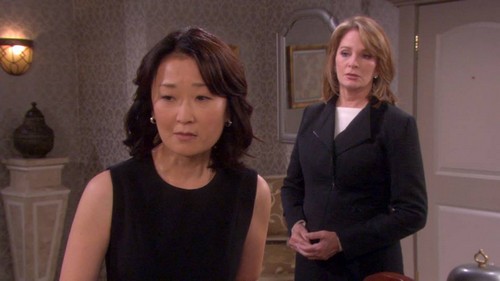 “Days of Our Lives” spoilers and news for April 13-17 tease that the week will be packed full of exciting drama, and some major storylines in Salem will really be heating up. DOOL coming and goings for the NBC soap reveal that Eileen Davidson is back as Kristen DiMera and will appear in some must see episodes, rumor has it DOOL fans will not want to miss a single second. According to “Days of Our Lives” spoilers, this is what fans can expect to see during the week of April 13:

Monday April 13 – “Days of Our Lives” spoilers reveal that on Monday’s episode of the NBC soap, DOOL fans can expect to see sparks fly when Abigail Deveraux (Kate Mansi) and Chad DiMera (Billy Flynn) share a heated confrontation. Abigail demands to know what Chad’s intentions are, but she gets more than she bargained for when he answers her loaded question.

Tuesday April 14 – According to “Days Of Our Lives” casting news, Eileen Davidson is back as the diabolical Kristen DiMera, and she has a big surprise for DOOL fans. According to spoilers in the latest edition of Soap Opera Digest, Kristen DiMera is the proud mother of Brady (Eric Martsolf) and Theresa’s (Jenn Lilley) baby (like we didn’t all see that twist coming a mile away).

Wednesday April 15 – Spoilers for the April 15th episode of “Days of Our Lives” reveal that on Wednesday, Kristen (Eileen Davidson) orders her henchman Clint to bring Theresa Donovan to her – apparently when Kristen isn’t attending Mommy & Me classes, she has plenty of time to be up to her old tricks. Also, Nicole (Arianne Zucker) heads out on a date – and Daniel is shocked when he realizes that he knows the new man in her life.

Thursday April 16 – “Days of Our Lives” spoilers indicate that on April 16th fans of the NBC soap can expect to see JJ and Paige (True O’Brien) make love for the first time – and JJ’s former flame, Eve (Kassie DePaiva), is not happy that he seduced her daughter. Meanwhile, across town, the claws come out when Nicole and Theresa Donovan wind up in a hair-pulling brawl.

Friday April 17 – According to DOOL spoilers on Friday, April 17th, Eve Donovan freaks out on JJ (Casey Moss) for having sex with Paige – and she blames Jennifer Horton for pushing the teens back together. Kate (Lauren Koslow) has a meltdown of her own across town and betrays her son Lucas (Bryan Datillo) because she is not impressed with some of the decisions he has made recently.

So DOOL fans, are you as excited as we are to have vixen Kristen DiMera back? What do you think she wants with Theresa – she already has her firstborn? Are you as grossed out as we are about JJ having sex with Paige after he slept with her mother Eve? Let us know what you think in the comments below and don’t forget to check CDL tomorrow for more “Days of Our Lives” spoilers and news.