Days of Our Lives (DOOL) Spoilers: Bo and Steve Bust Out, Escape Gas Leak Before Explosion – Aiden Prepares For Murder? 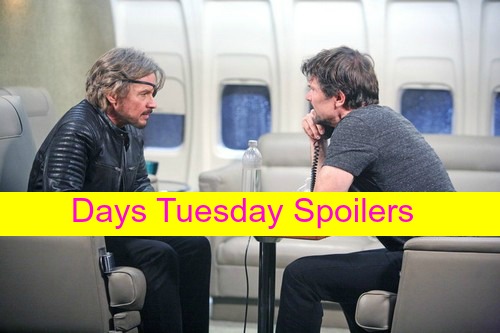 “Days of Our Lives” spoilers for Tuesday, October 27, tease that the pressure will start to mount as Aiden (Daniel Cosgrove) prepares to kill Hope (Kristian Alfonso). Aiden promised the DiMeras that he could handle this, but Andre (Thaao Penghlis) doesn’t seem very confident in his abilities.

At the end of Monday’s episode, someone slipped a bag over Aiden’s head and appears to be taking him somewhere. Perhaps Andre sent one of Stefano’s (Joseph Mascolo) minions to scare Aiden a little. They don’t want to take a chance on Aiden losing his nerve.

Then again, it’s possible that Rafe (Galen Gering), Shawn D (Jason Cook) or someone else could be playing a bit of a trick on Aiden. After all, DOOL spoilers say Hope will be off having a crazy night at her bachelorette party. Maybe when the mask is pulled away, Aiden will be at the pub or club for a night of drinking with the boys. A Bachelor party for the murderer wannabe?

It’s not clear who those boys would be since Aiden doesn’t really have any friends in town, but they could always get several Salemites together just for show. Regardless of the reason for Aiden’s brief kidnapping, it should leave him on edge. The closer Aiden gets to his wedding night, the more nervous he gets about murdering Hope.

Meanwhile, Daniel (Shawn Christian) will grow worried about one of his good friends. “Days of Our Lives” spoilers indicate that Eric’s (Greg Vaughan) actions will cause concern. Naturally, Dr. Dan will try to give Eric a piece of helpful advice.

DOOL rumors hint that all of this could be about Eric’s drinking. Over the past few weeks, “Days” viewers have been seeing Eric turn to the bottle more and more. Things just haven’t been going Eric’s way lately and alcohol seems to lessen the blow. Let’s hope Daniel can talk some sense into Eric before his drinking gets out of hand.

In Mexico, Bo (Peter Reckell) and Steve (Stephen Nichols) will be faced with extreme danger. They managed to loosen the bar they were shackled to, but they caused a gas leak in the process. Steve and Bo will need to work fast if they want to make it out of this alive. Fortunately, it looks like they’ll manage to gain control of the situation. Stick with “Days of Our Lives” to watch our heroes begin their journey home.

So “Days” fans, what do you think about the news that Aiden will feel the walls closing in as he gets ready for the big day? Will Daniel convince Eric to make some updates to his behavior? How will Bo and Steve get out of their jam? Let us know what you think in the comments below and don’t forget to check CDL often for the latest “Days of Our Lives” spoilers, rumors, updates and news.