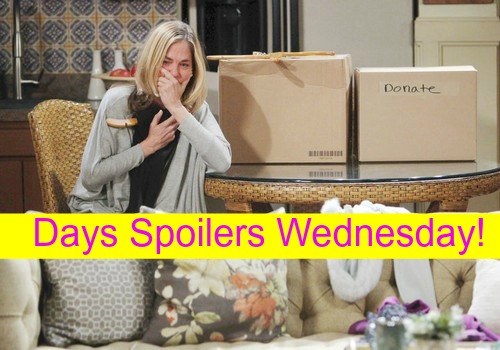 “Days of Our Lives” (DOOL) spoilers for Wednesday, October 28, tease that Aiden (Daniel Cosgrove) will make a stunning admission. After drinking far too much at his bachelor party, Aiden nearly confessed his evil plan to Rafe (Galen Gering). Luckily, Aiden caught himself before he spilled the whole story. However, now Aiden has stumbled over to Hope’s (Kristian Alfonso) house and he’s dealing with major guilt.

DOOL spoilers reveal that Aiden will begin to come clean, but he’ll ultimately choose to move forward with his scheme. Still, Hope’s suspicions will be raised. Aiden’s been rambling about how he can’t go through with it and Hope probably believes he’s talking about the wedding. Aiden will have to give Hope some sort of excuse for how he’s feeling. By the time Aiden’s through, Hope will be wondering if they should postpone the ceremony.

After all, Hope has been having a few doubts already. Hearing a shocking confession on the eve of her wedding isn’t exactly going to give Hope peace of mind. Nevertheless, the show must go on. It looks like Hope will agree to marry Aiden anyway.

In the meantime, Bo (Peter Reckell) will try to get in touch with Hope from the plane. Unfortunately, it won’t work out. Poor Bo’s bad luck streak just never ends. In fact, we’ll see that streak continue with a plane crash later this week.

Other “Days of Our Lives” spoilers say Eve (Kassie DePaiva) will stop by to see Chad (Billy Flynn) in the hospital, but it won’t be a friendly visit. While Eve is in Chad’s room, she’ll decide to get revenge for Paige’s (True O’Brien) death. Perhaps Eve will try to murder Chad like Sami (Alison Sweeney) did. This doesn’t sound like good news for Chad, but there could be a silver lining. It appears Chad may awaken in the midst of the chaos.

Meanwhile, Abigail (Kate Mansi) will finally get a glimpse of what Ben (Robert Scott Wilson) is capable of. “Days” spoilers indicate that Ben will fly into a rage and Abigail will become frightened by how forceful he can be.

DOOL rumors hint that life will be rough for Abigail over the next couple of months. Abigail will soon get a big clue that could lead her to a startling conclusion. Stick with “Days of Our Lives” for updates on the danger that’s coming up for Abigail and her baby.

So “Days” fans, what do you think about Aiden’s admission? How will Hope react to Aiden’s bizarre behavior? What will Eve try to do when she sees Chad? Will Abigail realize that Ben is deeply disturbed? Let us know what you think in the comments below and don’t forget to check CDL often for the latest “Days of Our Lives” spoilers, rumors, updates and news.