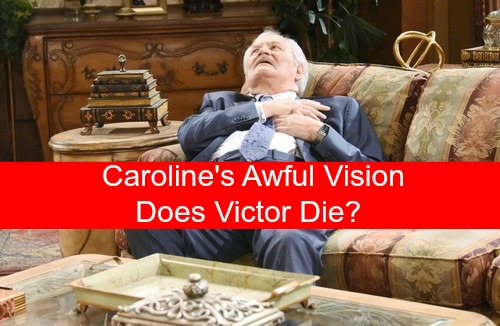 “Days of Our Lives” (DOOL) spoilers tease that Caroline (Peggy McCay) will have another disturbing vision. Ever since Caroline received the powerful drug that improved her condition, she’s been having vivid mental pictures of her loved ones in danger.

Caroline’s visions have been focused on Bo (Peter Reckell) and she was even able to predict his death just hours before it happened. Now that Bo is gone, Caroline will begin to visualize peril for someone else she holds dear.

It wouldn’t be all that surprising when you consider how wound up Victor has been lately. Victor spends most of his time ranting about the people he disapproves of. It seems Victor needs to take it down a notch if he expects to live until Christmas.

Bo had a terminal condition and there was no way Caroline’s vision could’ve prevented anything. However, Caroline might have a chance to warn Victor before it’s too late. “Days” viewers know that Victor is incredibly stubborn, but he might be willing to listen to Caroline’s worries.

After all, Caroline’s visions have proved accurate thus far. Besides, Victor has a soft spot for Caroline and he’ll probably want to ease her mind. Let’s hope that Victor can receive the appropriate care. The last thing anyone wants is another death in Salem.

“Days of Our Lives” spoilers indicate that we’ll still have to say goodbye to Daniel (Shawn Christian) before long, but there’s a light at the end of this fatality tunnel. DOOL buzz suggests that the NBC soap won’t be quite as heavy in the spring.

It looks like we could trade some of the mourning for more action and romance. Stay tuned to “Days of Our Lives” for updates on the brighter months ahead.

So “Days” fans, what do you think about the news that Caroline will grow concerned when she has a dreadful vision about Victor? Will Caroline be able to prevent the impending doom?

Are you hopeful that Victor will be sticking around for a while? Let us know what you think in the comments below and don’t forget to check CDL often for the latest “Days of Our Lives” spoilers, updates and news.