Days of Our Lives (DOOL) Spoilers: Chad Proposes to Abigail, Chabby Gets Married! 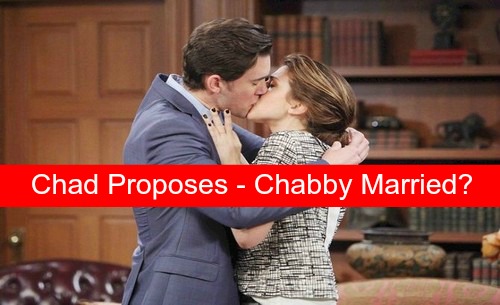 “Days of Our Lives” (DOOL) spoilers reveal that Abigail’s (Kate Mansi) heartbreak will soon turn to determination. Now that Chad (Billy Flynn) has been brainwashed by Andre (Thaao Penghlis), he’ll be moving full-speed ahead with Belle (Martha Madison).

However, Abby won’t give up on her love. When Abigail spots the pair on a date, she’ll see that Chad is acting completely out of character.

DOOL spoilers tease that Abigail will be on a mission to unravel this mystery. Abby will confront Andre and Stefano (Joseph Mascolo), but she probably won’t be able to pry anything out of them. Nevertheless, Abigail will continue her quest and Chad will eventually snap out of the trance.

Chad will be thrilled when he finally regains control of his own actions and emotions. In fact, Chad’s excitement will prompt a grand gesture. “Days of Our Lives” spoilers indicate that Chad will ask Abigail to marry him. The proposal will undoubtedly catch Abigail off guard, but we have a feeling she’ll accept.

In a recent interview with Glamour, Kate Mansi mentioned Abigail’s wedding book for Chad. Since “Days” tapes nearly six months in advance, it appears Mansi has filmed scenes that relate to Chad and Abigail’s upcoming nuptials. This is definitely huge news for “Chabby” fans!

Of course, Chad will have a major beef with his brother after all the turmoil he caused. There’s a good chance Chad will purposely neglect to tell Andre that he’s no longer under his control. Whatever the case, it’s time for Andre to get what’s coming to him.

DOOL spoilers say Chad will want to bring down the DiMeras with Abigail by his side. This dynamic duo will attempt to exact the ultimate revenge.

In the meantime, Andre will be wrapped up in making Hope’s (Kristian Alfonso) life miserable. It seems Andre just isn’t satisfied unless he’s stirring up trouble. Fortunately, that will work out quite well for Chad and Abigail. While Andre is busy plotting against Hope, a different scheme will be brewing. Both Andre and Stefano could be caught by surprise.

Chad has proven that he’s the kind of guy who makes things happen. After all, Chad knew Abigail was in danger and he saved the day. Still, challenging Ben (Robert Scott Wilson) was nothing compared to tackling world-class villains like Stefano and Andre.

Chad’s playing in the big leagues now. Once Chad’s plan is underway, there’ll be no turning back. Stick with “Days of Our Lives” for updates on the madness and mayhem to come.

So “Days” fans, what do you think about the news that Abigail’s persistence will pay off? Are you anxious to see Chad propose to Abby? Will they really be able to defeat Andre and Stefano?