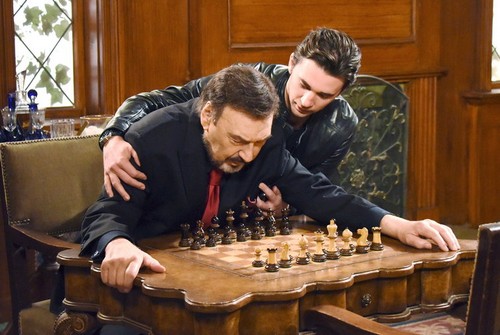 “Days of Our Lives” spoilers tease that Chad (Billy Flynn) will decide it’s time to confront his old man about his evil deeds. Chad will believe that Stefano (Joseph Mascolo) is trying to set him up for murder to manipulate him into doing what he wants. With that in mind, Chad will rush over to the mansion and a shouting match will ensue. Things will take a surprising turn when Stefano has a sudden health issue. At first, Chad will think Stefano is just laying it on thick to gain his son’s sympathy. However, Chad will quickly realize that Stefano could die if he doesn’t act fast.

Stefano and Chad haven’t exactly been on good terms lately, but they’re still family at the end of the day. DOOL spoilers say Chad will ultimately step up and do the right thing. Stefano will be rushed to the hospital for treatment and he’ll soon be on the road to recovery. Unfortunately, an argument with Victor (John Aniston) could put Stefano’s health at risk once again. Stefano isn’t the easiest man to get along with, but everyone should probably take it down a notch. The DiMera patriarch isn’t as young as he used to be and all these confrontations could aggravate his condition. 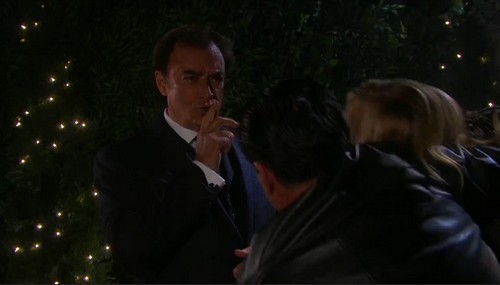 It appears another unexpected event could put stress on Stefano. “Days of Our Lives” spoilers reveal that Andre DiMera (Thaao Penghlis) will return to Salem on September 25. At least we’re supposed to think it’s Andre. “Days” rumors suggest that Andre may end up having a bit on an identity crisis. Longtime DOOL viewers will remember that Thaao Penghlis is also known for his role as Tony DiMera. It’s possible that Penghlis will play Tony posing as Andre.

Whatever the case, you know there’s bound to be trouble with an extra DiMera running around. The 50th anniversary promo video shows Andre’s men grabbing Sami (Alison Sweeney). One of them puts his hand over Sami’s mouth to stifle her screams. Andre simply grins mischievously, puts his finger to his lips and tells Sami to “shhhhh.” Where could Andre be taking Sami and what does he want with her? It’s tough to say, but it’s clear that this will not please the Brady clan. Since Bo’s (Peter Reckell) abduction is likely tied to the DiMeras as well, it sounds like an all-out war is brewing. Stick with “Days of Our Lives” to see an old feud reignited.

So “Days” fans, what do you think about the news that Chad will save Stefano’s life? Will this help them reconcile? What mischief will Andre indulge in once he arrives? Will the Bradys be furious when they get updates on Andre’s actions? Let us know what you think in the comments below and don’t forget to check CDL often for the latest “Days of Our Lives” spoilers, rumors, updates and news.