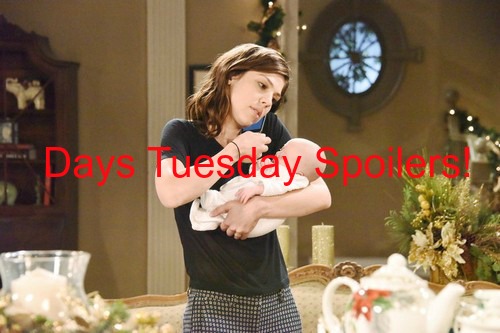 “Days of Our Lives” (DOOL) spoilers for Tuesday, December 29, tease that Thomas’ latest health scare will lead to a shocking revelation. Abigail (Kate Mansi) observed that her son was being awfully quiet. She felt him and noticed he was way too warm as well. Abby will give Jennifer (Melissa Reeves) updates on Thomas’ fever and they’ll head to the hospital.

The doctor will examine Thomas and some type of test will alert Abigail to what DOOL fans have suspected all along. Abigail will receive the news that Ben (Robert Scott Wilson) can’t be the father of her child.

Chad (Billy Flynn) will find out the details later this week. Abigail will struggle to convince Chad of the truth, but you can rest assured that everything will work out eventually.

Meanwhile, Nicole (Arianne Zucker) will decide to take control. Theresa (Jen Lilley) is a mess and Kate (Lauren Koslow) acts like she’s running Basic Black singlehandedly. Nicole will realize she’ll have to step up to pull off the New Year’s Eve fashion show.

Unfortunately, all of this drama is a walk in the park compared to what lies ahead for Nicole. Stick with “Days of Our Lives” to see how Daniel’s (Shawn Christian) upcoming death will affect Nicole’s future.

Other DOOL spoilers indicate that Ava’s (Tamara Braun) plan will take an interesting turn. We’re finally starting to see a few clues about what Ava might have in store. Ava was recently shown looking at a baby picture along with some text.

It was tough to tell from the tiny photograph, but the child appeared to be in a casket. The Bible verse below the pic also hinted that the child may be dead.

It’s possible that Ava conceived a baby with Steve (Stephen Nichols) and it later died. It’s equally possible that it was someone else’s baby, but she’s going to pretend Steve was the father.

Whatever the case, things are about to get very complicated for Steve and Kayla (Mary Beth Evans). “Days” spoilers reveal that Ava will do a bit more preparation to make sure her scheme lines up just like she hoped it would.

Stay tuned to “Days of Our Lives” to see Ava’s next move in this dangerous game.

So “Days” fans, what do you think about Thomas’ health scare? What about Nicole’s attempt to gain control of the fashion show? Does Ava have a deceased child with Steve or is this just another part of her scam? Voice your opinion in the comments below and don’t forget to check CDL often for the latest “Days of Our Lives” spoilers, updates and news.