BY Heather Hughes on May 11, 2015 | Comments: 2 comments
Related : Days of Our Lives, Soap Opera, Spoiler, Television 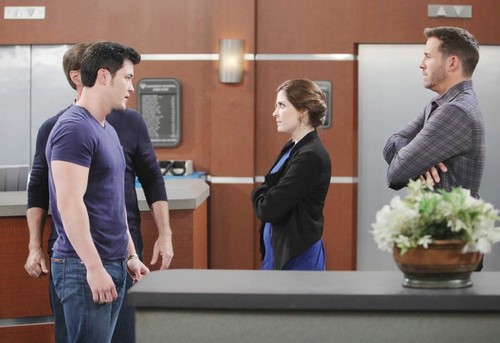 “Days of Our Lives” spoilers for Monday, May 11, hint that things could get tense between Brady (Eric Martsolf) and Paul (Christopher Sean). Brady has been so caught up in the baby drama that he hasn’t even had a chance to find out that Paul is his brother. It doesn’t sound like it’ll be the ideal family reunion. When Brady and Paul learn the news, they may have a few choice words for each other.

Meanwhile, JJ (Casey Moss) will plead his case to Roman (Josh Taylor). DOOL fans know that Cole (Riley Bodenstab) planted drugs in JJ’s backpack as part of Eve’s (Kassie DePaiva) scheme. That means JJ will have a lot of explaining to do. When the drugs are discovered, Roman will start to believe that JJ is falling back into his old ways. JJ will try to make Roman understand that his life is on a new path and someone must have set him up.

Other “Days of Our Lives” spoilers tease that Marlena (Deidre Hall) will try to convince Chad (Billy Flynn) that what happened with Kristen (Eileen Davidson) was simply an accident. Chad has been struggling to deal with his grief and he’ll probably be a little cold toward Marlena for her part in Kristen’s death. Nevertheless, Marlena will do her best to smooth things over. It looks like Marlena might get through to Chad. “Days” rumors say that Chad will try to stop Stefano (Joseph Mascolo) from seeking revenge. Will Chad intervene before it’s too late? Stay tuned to the “Days of Our Lives” to see if Chad will save the day. 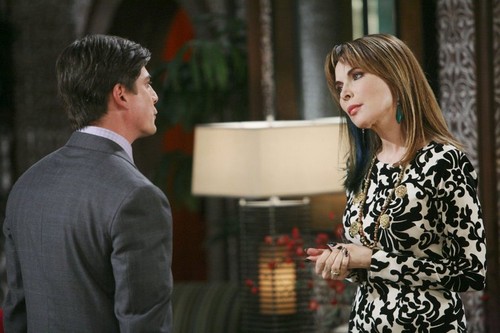 Lucas (Bryan Dattilo) will also have vengeance on his mind. Kate (Lauren Koslow) let slip that Lucas was having an affair with Adrienne (Judi Evans) and Victor (John Aniston) fired him for it. Chad offered Lucas another job and he intends on using it to bring Kate down. Lucas will inform Kate that he plans on completely crushing her career. It seems Kate will regret sacrificing her son for the sake of winning back her position at Mad World. Stick with DOOL to find out how far Lucas will go for retribution.

So “Days” fans, what do you think about Brady and Paul learning they’re brothers? Will JJ be able to talk his way out of trouble? Can Marlena convince Chad that Kristen’s death was unintentional? What about Lucas and Kate’s drama? Will Kate have to make some updates to her plan now that Lucas is focused on taking her down? Let us know what you think in the comments below and don’t forget to check CDL tomorrow for the latest “Days of Our Lives” spoilers, rumors, updates and news.