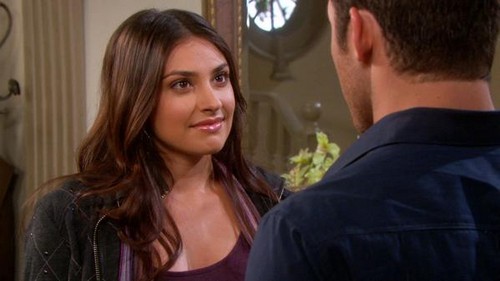 “Days of Our Lives” spoilers for Friday, February 27, reveal that DOOL viewers will get to end the week with a good, old-fashioned soap slap. Since Kate (Lauren Koslow) wrecked Chad’s (Billy Flynn) chances of patching things up with Jordan (Chrishell Stause), it’s freed him up to focus on vengeance. He’ll get revenge on Kate soon enough, but for now Chad’s about to resume his original plan of payback for Abigail (Kate Mansi). On the episode airing Friday, February 27, he’ll test what Abigail is willing to do to keep Ben (Robert Scott Wilson) out of prison. Just how far will Abigail go to protect the man she loves? It’s tough to say, but Chad has the upper hand and she may be forced to do whatever it takes.

Other “Days of Our Lives” spoilers hint that Eve (Kassie DePaiva) will deal with jealousy issues on Friday, February 27. Her hookups with JJ (Casey Moss) have seemed fairly meaningless so far, but could Eve really have feelings for him? DOOL viewers may not understand her true motives for sleeping with JJ, but she sure seems to enjoy it. Unfortunately, she also seems to enjoy screwing up his life. Stay tuned to “Days” to see if the green-eyed monster messes with JJ’s plan.

Meanwhile, JJ’s phony girlfriend scheme seems to have worked. Paige (True O’Brien) has declared that she’s done with JJ and now she’s about to move on with someone new. “Days of Our Lives” spoilers for February 27 tease that she’ll ask Cole (Riley Bodenstab) out on a date. Cole has expressed interest in Paige ever since he came back to town and it seems likely he’ll accept. Stick with DOOL in the coming weeks to see if they’ll become Salem’s newest couple.

As Paige tries to move on with her life, Theresa (Jen Lilley) will try to keep Melanie (Molly Burnett) from prying into hers. “Days of Our Lives” spoilers for February 27 indicate that the two women will have a confrontation about Melanie’s knowledge of Dr. Mandrake (Sal Landi). Will Mel provide information that sparks Theresa’s memory of having her embryo stolen? We’ll have to wait and see, but Kristen’s (Eileen Davidson) return is imminent so we know that the baby drama’s coming soon.

So “Days” fans, what do you think about Chad playing dirty? Will Abigail be willing to do anything to protect Ben? What about Eve’s jealousy? Will it mess up JJ’s plan or somehow get in the way of Paige and Cole? Can Melanie help Theresa learn the truth about what Kristen did? Let us know what you think in the comments below and don’t forget to check CDL tomorrow for the latest “Days of Our Lives” spoilers and news.