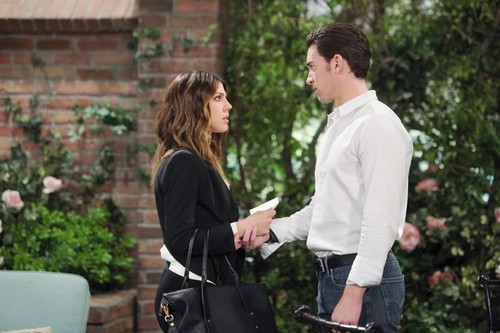 “Days of Our Lives” spoilers reveal that Chad (Billy Flynn) will decide to stop denying his feelings for Abigail (Kate Mansi). Stefano (Joseph Mascolo) came clean about his secret scheme and it really wasn’t all that sinister. Now that Chad knows the truth, he can go after Abigail without fearing for her safety. However, there’s still a major obstacle to overcome. Chad made it perfectly clear to Abigail that he was just putting on a show to get her into bed. Chad will have to do some serious groveling to get Abigail to reconsider and that’s exactly what he intends to do.

DOOL spoilers indicate that after careful contemplation, Chad will let Abigail know how much she means to him. Chad loves Abigail with all his heart and soul. Abigail will likely be hesitant to accept Chad’s apology at first, but she shouldn’t be able to resist him for very long. “Days” viewers have watched Abigail gaze adoringly at Chad whenever he shows his softer side around kids. There’s no doubt that Abigail has been thinking Chad would make a great father to her child.

Once Chad confesses his love, Abigail may decide she’s willing to give him another chance. Of course, that means Ben (Robert Scott Wilson) would get kicked to the curb and we all know they’re not going to end this love triangle that quickly. Instead, there’s a soapy paternity swap headed our way. Well, at least a potential swap. “Days of Our Lives” spoilers tease that Clyde (James Read) will take precautions to make sure things work out for the Westons. In other words, Clyde will influence the results of the paternity test so that Ben will be listed as the baby’s father. Whether the test needs swapping or not remains to be seen.

Ben will be probably be thrilled about starting a family with Abigail and Clyde will look forward to getting his hands on Abigail’s valuable property in Ireland. Unfortunately, Clyde’s sneakiness could leave Chad out in the cold. Abigail will undoubtedly feel obligated to stay with Ben if she’s carrying his child. Some DOOL rumors hint that Clyde might even be killed off and take the secret switcheroo to his grave. If that happens, the truth may not be revealed until much later. Perhaps the baby will be born with a severe illness and he or she will need something donated by the father. Surprise, surprise! Ben wouldn’t be a match. Daddy Chad could come swooping in and save the day.

Since Abigail is obviously fighting her feelings for Chad, knowing he was her child’s father could be the push she needs to give into her desires. Will Chad and Abigail find their way back to each other? We’ll have to wait and see, but it certainly looks like the writers are setting up “Chabby” as endgame. Stay tuned to “Days of Our Lives” to see how the rest of this exciting storyline plays out.

So “Days” fans, what do you think about the news that Chad will tell Abigail how he really feels about her? Will Abigail be willing to listen? After Clyde influences the results of the paternity test, will Abigail stay with Ben to keep their family together? Will Abigail change her mind when she gets updates on the truth? Let us know what you think in the comments below and don’t forget to check CDL tomorrow for the latest “Days of Our Lives” spoilers, rumors, updates and news.