‘Days of Our Lives’ Spoilers: Serena’s Statue Switch Plans Mess Up – Cole Warns JJ He Knows All About Cheating 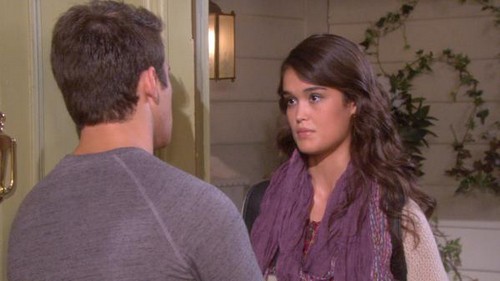 “Days of Our Lives” spoilers reveal that someone could soon learn JJ’s (Casey Moss) secret. Paige (True O’Brien) recently mentioned the idea of snatching JJ’s phone to see just who he’s been getting friendly with. It appears Cole (Riley Bodenstab) will take her suggestion and run with it. DOOL spoilers indicate he’ll claim to know all about what JJ’s been doing and who he’s been doing it with. It seems likely that he’ll find a way to grab JJ’s phone and take a look at his recent texts. Then again, Cole may try bluffing to get Paige’s ex to confess. Whatever happens, JJ’s sure to be sweating if he thinks anyone knows he slept with his girlfriend’s mother. “Days” viewers should enjoy watching him squirm once he gets in over his head.

As JJ struggles to keep his secret, another character will face difficulties of her own. “Days of Our Lives” spoilers hint that Serena’s (Melissa Archer) strategy will hit a snag and she’ll have trouble finding a way to solve the problem. DOOL fans know that she’s been up to something for several weeks. She recently searched Eric’s (Greg Vaughan) apartment after she sent him around the corner for a beverage. Time will tell if Serena will continue to be as smooth as her smoothie.

While he was out, Serena found an elephant statue that seemed to peak her interest. Perhaps it’s some type of valuable trinket from their days together in Africa. Some “Days of Our Lives” spoilers say she’ll be on a mission to swap his statue for a lookalike, but things won’t go according to plan. Will Nicole (Arianne Zucker) keep meddling despite all the suffering it’s caused her? It’s possible, but the seeds of doubt she’s already planted may be enough. Eric will likely be onto Serena’s scheme before long. After all, nothing stays hidden forever in Salem.

So “Days” fans, what do you think about these unraveling secrets? Are you ready for everything to finally be exposed? Does Cole really know what he claims to and if so, will he spill the beans to Paige? What about Serena’s statue switch? Why is that little elephant so important? Let us know what you think in the comments below and don’t forget to stop by CDL tomorrow for the latest “Days of Our Lives” spoilers and news.