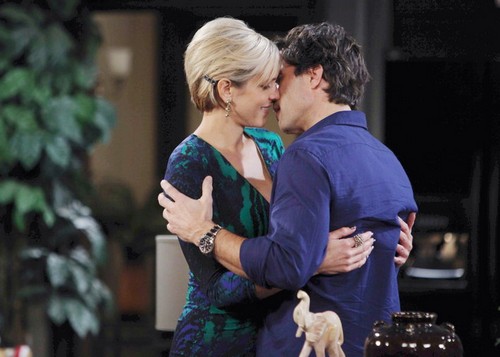 “Days of Our Lives” spoilers for Tuesday, July 21, tease that Abigail (Kate Mansi) will open up to Will (Guy Wilson) about her plans if the baby is revealed to be Chad’s (Billy Flynn). Abigail told Hope (Kristian Alfonso) that she won’t terminate her pregnancy, which means we definitely have a little DiMera or Weston on the way. Nevertheless, Abigail may try to pass the baby off as Ben’s (Robert Scott Wilson) if it turns out that Chad is the father. Whatever the case, Abigail probably wants to keep her son or daughter as far away from the DiMera clan as possible.

Meanwhile, Eric (Greg Vaughan) will let Serena (Melissa Archer) know that he’s officially done with her. DOOL spoilers say Eric will insist there’s no hope for reconciliation after everything that happened with Xander (Paul Telfer). “Days” viewers know that Eric never really loved Serena anyway. Eric tried to deny it for months, but his heart truly belongs to Nicole (Arianne Zucker). Unfortunately, Nicole is convinced Daniel (Shawn Christian) is the one she belongs with. Eric will try to make peace with Nicole’s decision and move on with his life.

As Eric tries to let go of the past, Daniel will decide to secure his future with Nicole. “Days of Our Lives” spoilers reveal that Daniel will ask Nicole to marry him. DOOL rumors have been hinting that this proposal was coming for quite a while and it looks like the big day has finally arrived. Daniel will pop the question and it appears Nicole will accept. The question is: will this wedding actually happen? Word has it that Daniel and Nicole won’t actually make it to the altar. Even if they do, there’s a good chance that Eric will come swooping in and object.

Of course, before we start thinking about wedding bells, we have to get Serena’s grudge out of the way. Serena will soon have the proof she needs to give Daniel updates on Eric and Nicole’s feelings for each other. However, Dr. Dan is a changed man and he may not blow up like he usually does. If Daniel and Nicole are going to break up, Nicole might have to be the one to end it. Stay tuned to “Days of Our Lives” to see how long their relationship will last.

So “Days” fans, what do you think Abigail will do if the baby is Chad’s? Will Eric really let go of his love for Nicole? How will Nicole react to Daniel’s big news? Will Nicole accept Daniel’s proposal? Let us know what you think in the comments below and don’t forget to check CDL tomorrow for the latest “Days of Our Lives” spoilers, rumors, updates and news.