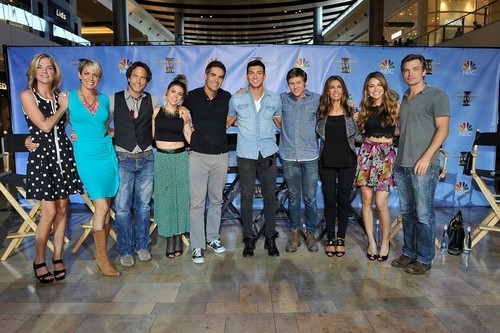 “Days of Our Lives” spoilers for Wednesday, April 1, tease that Marlena (Deidre Hall) will make a shocking discovery on Will’s (Guy Wilson) tablet. Will has been doing research for another article on Paul (Christopher Sean) and it seems Marlena will become privy to information Will has uncovered. It’s possible that Marlena will learn about Paul’s father and she’ll want to give him the news. However, Will is determined to expose the truth in a big way. If word gets out now, Will’s story could fizzle before he even finishes a rough draft.

Unfortunately, it looks like Will has made a wrong assumption. It turns out Paul isn’t a DiMera after all. DOOL rumors have been saying that Paul might be John’s (Drake Hogestyn) son and we now know those rumors are true. In an interview with Michael Logan at TV Insider, Drake Hogestyn confirmed that John is indeed Paul’s father. It sounds like Will is opening a big can of worms and the effects could be life-changing for several Salemites. Stay tuned to “Days” in the coming weeks to watch John and Paul figure out their new relationship.

Meanwhile, another father and son will bond over a common interest. “Days of Our Lives” spoilers indicate that Stefano (Joseph Mascolo) will be pleased to hear about Chad’s (Billy Flynn) manipulation of Abigail (Kate Mansi). Stefano is a master manipulator so it’s not surprising that he would approve of Chad’s sneakiness. Chad has a plan for vengeance and it’s already underway. However, there’s no denying that a spark exists between Chad and Abigail. Maybe Chad has us all fooled, but it certainly looks like he still has feelings for his former love. Chad may have to give his scheme a few updates if he finds himself falling for Abigail once again.

Other “Days of Our Lives” spoilers hint that Melanie (Molly Burnett) will find a way to prove her theory about Theresa (Jen Lilley). Melanie has been putting it all together one piece at a time and she’s getting closer to learning that Theresa’s embryo was stolen. It’s not clear how Melanie intends on proving that Theresa was pregnant, but Kristen (Eileen Davidson) won’t be happy that Melanie is solving the mystery. Word has it that Kristen will be back for 10 episodes starting April 14 so stick with DOOL for all the baby drama.

So “Days” fans, what do you think about the confirmation that John is Paul’s father? How will John find out? What about Chad’s plot against Abigail? Does Chad really want to settle the score? How will Melanie discover the truth about Brady (Eric Martsolf) and Theresa’s baby? Let us know what you think in the comments below and don’t forget to check CDL tomorrow for the latest “Days of Our Lives” spoilers, rumors, updates and news.