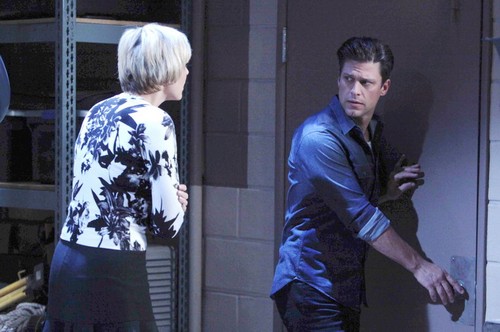 “Days of Our Lives” spoilers for Tuesday, June 16, reveal that Eric (Greg Vaughan) and Serena (Melissa Archer) will have a huge confrontation. Eric will be outraged by all of Serena’s lies, but she’ll maintain that she had to keep him out of it. Serena’s time in Salem was focused solely on retrieving the diamonds at first, but she really grew to love Eric as the months went by. Now Serena’s concerned for Eric’s safety. Nevertheless, Eric will demand to know why Serena would dupe him for her own personal gain. It sounds like Serena’s details could tip Eric off to the danger Nicole (Arianne Zucker) is currently facing.

Across town, Xander (Paul Telfer) will show Nicole exactly how he feels about her recent meddling. “Days of Our Lives” spoilers tease that Xander will grip Nicole by the neck and try to finish her off. Thanks to Navidad (Rayna Tharani), the security guard has been drugged and the front lights are out at the news station. It seems there’s nothing standing in the way of Nicole’s grisly murder. Fortunately, DOOL spoilers say Eric could get involved to prevent a gruesome scene. Stick with the NBC soap to see if Eric will get updates on Xander’s actions just in time.

Meanwhile, Justin (Wally Kurth) and Kate (Lauren Koslow) will argue about a business decision. “Days” spoilers indicate that a potential employee will be a source of contention for the work partners. We don’t know for sure who the possible hire might be, but DOOL rumors hint that Justin may want to bring Paul (Christopher Sean) on board. We’ve already seen Justin asking for Paul’s help with translations and he could decide that Paul would serve as a vital tool for Mad World. It doesn’t hurt that this move would give Justin even more opportunities to convince Paul to win back Sonny (Freddie Smith).

Kate, on the other hand, certainly wouldn’t be pleased with the idea of Paul working at the company. In Kate’s eyes, Paul is a homewrecker and a constant thorn in Will’s (Guy Wilson) side. Will is just as much to blame for his crumbling marriage as Paul is, but you can’t blame Kate for siding with her grandson. Still, Victor (John Aniston) made it clear that Justin is ultimately the one in charge here. If Justin wants to give Paul a job, he’ll likely do it despite Kate’s objections. Stay tuned to “Days of Our Lives” to see if Paul or possibly another Salemite will be joining the team at Mad World.

So “Days” fans, what do you think about the end of Serena’s scheme? Was Serena wrong to keep Eric in the dark or was she truly protecting him? What about Xander’s deadly grip? Will Nicole and Eric turn the tables? Will Paul be the employee that Justin and Kate disagree on? Let us know what you think in the comments below and don’t forget to check CDL tomorrow for the latest “Days of Our Lives” spoilers, rumors, updates and news.