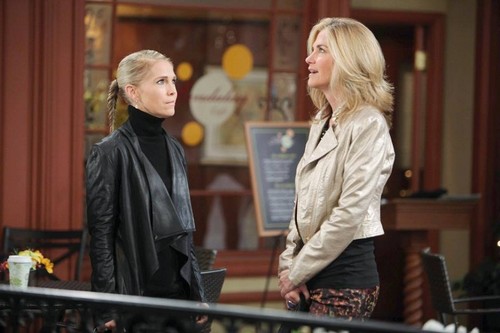 The latest “Days of Our Lives” spoilers hint that Jennifer (Melissa Reeves) is about to play the blame game once again. DOOL fans know that Jen can be a bit overprotective. When Abigail (Kate Mansi) had hot fling with EJ (James Scott), Jennifer was convinced that her daughter was just an innocent victim of EJ’s seduction. Now that she knows JJ (Casey Moss) hooked up with Eve (Kassie DePaiva), Jen will undoubtedly turn this into a “Mrs. Robinson” type of situation. Even catching the pair in the act won’t stop Jennifer from holding Eve responsible.

It’s understandable that Jen would love her children unconditionally, but at some point she’ll have to admit that they aren’t kids any more. Abigail and JJ are adults that consented willingly to their frequent “sexcapades.” You can bet that this won’t be the last time either one of them makes a mistake. Will Jennifer ever stop being a helicopter parent or is she destined to mother her cubs forever? If it turns out to be the latter, Jen better get used to being disappointed by Abigail and JJ’s poor decisions.

Jennifer may also have to make peace with Eve in the near future. Rumors are swirling that Eve might be pregnant with JJ’s baby. While there have been no confirmed “Days of Our Lives” spoilers as of yet, it would certainly be an interesting twist to this DOOL storyline. JJ has proven that he’s nowhere near ready to become a father. If Eve does end up pregnant, “Days” viewers will be anxious to see how long she’ll keep the news to herself. It’s bad enough that Eve slept with Paige’s (True O’Brien) ex-boyfriend, but getting pregnant by him seems unforgivable. It’s doubtful that Paige could ever move past such a devastating revelation. After all, a baby isn’t something Eve and JJ can just sweep under the rug. We’ll let you know if these pregnancy rumors turn into actual “Days of Our Lives” spoilers in the next few weeks.

So “Days” fans, what do you think about Jennifer placing the blame elsewhere as usual? Is Jen just being a good mom or should she give it a rest? What about Eve’s potential pregnancy scare? Do you think the rumors are true and if so, would you like to see a “Jeve” baby happen? Let us know what you think in the comments below and don’t forget to check CDL often for the latest “Days of Our Lives” spoilers and news.