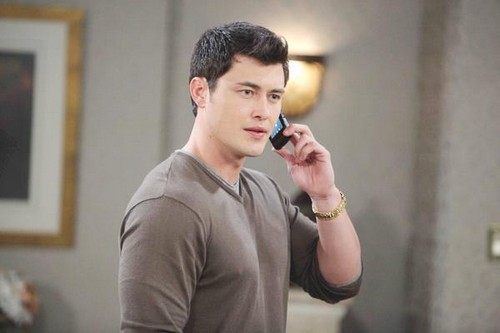 “Days of Our Lives” spoilers for the week of February 2-6 reveal that DOOL fans can expect some exciting drama in Salem, and rumor has it they won’t want to miss a single episode of the NBC soap. February Sweeps are upon us, which means the DOOL writers are pulling out all the stops and fans are in for some thrilling storylines. According to “Days of Our Lives” spoilers this is what fans can expect to see the week of February 2.

Monday February 2: “Days of Our Lives” spoilers for Monday February 2nd reveal that JJ and Paige have an intense conversation about his affair, and he makes a shocking admission to his ex-girlfriend. Could he finally reveal to Paige that he cheated on her with her mother Eve Donovan (Kassie DePaiva)?

Tuesday February 3: According to DOOL spoilers, on Tuesdays episode of the NBC soap Paul and his ex-boyfriend Sonny Kiriakis have a long overdue chat. Meanwhile across Salem, Paige (True O’Brien) decides to take her Aunt Theresa’s advice and let’s be honest – Theresa Donovan (Jennifer Lilley) is the last woman in Salem that should dishing out advice to teenage girls.

Wednesday February 4: “Days of Our Lives” spoilers tease that on February 4th DOOL fans can expect to see a major secret come to the surface on the NBC soap. Also, one of our favorite Salemites will be brutally attacked and wind up in the hospital. DOOL spoilers have revealed that Sonny Kiriakis (Freddie Smith) is rushed to the hospital after he is assaulted and seriously injured, there is no news yet on who the assailant is.

Thursday February 5: On Thursday February 5th “Days of Our Lives” spoilers tease that Adrienne and Lucas (Bryan Dattilo) will share a close moment, however it is interrupted when they receive news of Sonny’s attack and they rush to his side as he undergoes major surgery. Rumors have been floating around for weeks that Eric’s new love interest Serena Mason (Melissa Archer) is up to something, and on Thursday’s episode of the NBC soap her peculiar behavior tips Eric off that something just isn’t right.

Friday February 6: According to “Days of Our Lives” spoilers in the latest edition of Soap Opera Digest, on February 6th DOOL fans won’t believe what Victor Kiriakis does. Considering Sonny is lying in a hospital bed, rumor has it Victor sets out to get revenge on whoever is responsible.

So DOOL fans, who do you think puts Sonny in the hospital and is Clyde [James Read] responsible? Will his near death experience be what brings his father Justin back to Salem? Is this the week that Paige finally find outs her mother Eve had sex with her boyfriend JJ…more than once? What do you think Victor is up to on February 6th? Let us know what you think in the comments below and don’t forget to check CDL tomorrow for more “Days of Our Lives” spoilers and news.