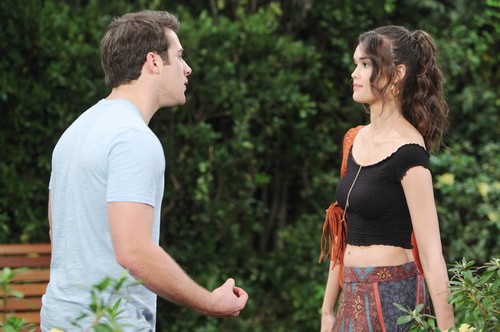 “Days of Our Lives” spoilers for Monday, July 13, tease that Daniel (Shawn Christian) will pump Victor (John Aniston) for information on Xander (Paul Telfer). Daniel will think Victor knows more about Xander than he’s letting on. Of course, DOOL viewers know that Victor is definitely a guilty party. Victor will try to deny knowing anything about Xander’s shady dealings, but Daniel will undoubtedly keep digging. Once Dr. Dan gets an idea in his head, there’s no stopping him.

Meanwhile, Nicole (Arianne Zucker) will rip into Serena (Melissa Archer) for her actions. “Days” spoilers say Nicole will be upset that Serena has been working with Xander and now she’s essentially covering for him. On top of that, Serena has been secretly meeting with Eric (Greg Vaughan). Serena initially chose to save her own skin instead of turning in her evil cohort, but she seems to be changing her tune. Serena still hopes to keep herself out of trouble, but she’s been working with Eric to make Xander pay. Nevertheless, Nicole is sure to have a thing or two to say about everything that’s happened since Serena strutted into Salem. 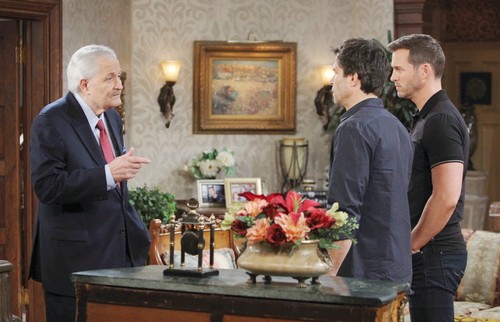 Other “Days of Our Lives” spoilers reveal that Kyle (Michael Cardelle) will make his move with Paige (True O’Brien). When JJ (Casey Moss) spots the flirting in progress, he won’t like what he sees. Unfortunately for JJ, Paige couldn’t care less about his approval. In fact, Paige would be more than happy to hook up with Kyle just to rub it in JJ’s face. DOOL rumors hint that Paige could come to regret getting mixed up with Kyle and the drug scene. Kyle is bad news and Paige is about to find out just how terrible things can get.

Despite Paige’s attempt to dissuade him, JJ won’t turn his back on the girl he loves. “Days of Our Lives” spoilers indicate that JJ will decide he has to do something before it’s too late. It sounds like JJ will end up agreeing to Roman’s (Josh Taylor) offer to serve as a narc. It’ll be a dangerous mission, especially with Clyde (James Read) as Kyle’s boss. Still, JJ will be able to keep an eye on Paige and that’s all that really matters. Can JJ keep Paige safe or is deadly trouble brewing? Stay tuned to the NBC soap for updates on Paige’s fate.

So “Days” fans, what do you think about Daniel demanding answers from Victor? Will Victor stay tight-lipped about Xander’s despicable deeds? Will Serena tell Nicole about her plan with Eric? Will JJ agree to snitch on Kyle to get him out of Paige’s life? Let us know what you think in the comments below and don’t forget to check CDL tomorrow for the latest “Days of Our Lives” spoilers, rumors, updates and news.