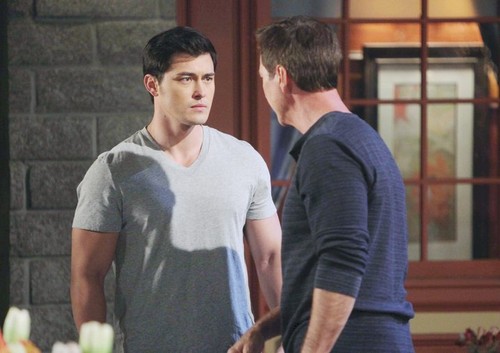 “Days of Our Lives” spoilers for Tuesday, April 21, tease that John (Drake Hogestyn) will try to patch things up with Paul (Christopher Sean). The father and son didn’t exactly get off to a great start. Shortly before the truth about Paul’s paternity was revealed, John had been criticizing Paul for his interference in Will (Guy Wilson) and Sonny’s (Freddie Smith) relationship. However, John hopes he can have a new beginning with Paul and make up for lost time. John will head to San Francisco to see if Paul will give him another chance. DOOL rumors say Paul will be slow to come around, but he’ll eventually find a way to accept John as his father. Stay tuned to “Days of Our Lives” to see when the tension will lift.

Meanwhile, Hope (Kristian Alfonso) and Aiden (Daniel Cosgrove) will find themselves in a bit of a predicament. “Days” fans know that Hope is a detective and Aiden is Salem’s go-to defense lawyer. They’re about to discover that love isn’t always easy when you’re on opposite sides of the law. Perhaps Hope and Aiden’s obstacle will be connected to Clyde (James Read). It’s clear that Hope thinks Clyde is bad news, but Aiden has no choice but to work with him. After all, Aiden agreed to help Clyde’s son, Ben (Robert Scott Wilson), out of his legal jam. Hope’s job is to go after shady characters and Aiden’s job is to get them off. In the end, they’ll just have to learn how to separate business and pleasure.

Of course, we know that Clyde probably won’t leave the ball entirely in Aiden’s court. “Days of Our Lives” spoilers hint that Ben’s case will be resolved in an unexpected way. Clyde is trying to bond with his son and he could have some sway in this situation. Ben has been grateful for Clyde’s help, but he may come to regret letting his father back into his life. Stick with “Days” to see if Clyde’s sneaky tactics will stir up trouble.

DOOL viewers will also be treated to a good dose of Kristen (Eileen Davidson). Kristen is burning through her 10-episode stint fast so you better catch her while you can. Brady (Eric Martsolf) will certainly try to catch Kristen before she gives him the slip. Kristen will be shocked when Brady shows up in Italy to confront her about Theresa’s (Jen Lilley) baby. Unfortunately for Brady, their confrontation will take a dangerous turn later in the week. Keep watching the NBC soap to find out if Brady can take the heat.

So “Days” fans, what do you think about John’s attempt to reconcile with Paul? Will Hope and Aiden work things out? What about Clyde’s strategy to help Ben? When Brady gets updates on Kristen’s scheme, will he be able to take back the child he shares with Theresa? Let us know what you think in the comments below and don’t forget to check CDL tomorrow for the latest “Days of Our Lives” spoilers, rumors, updates and news.