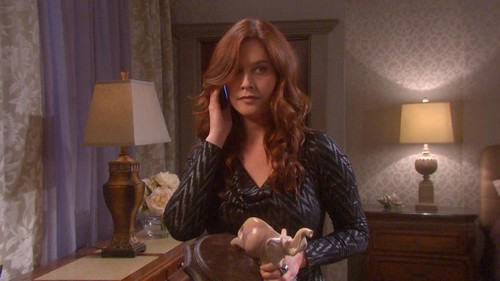 “Days of Our Lives” spoilers for Thursday, March 12, tease that the past may be gone, but it’s certainly not forgotten. DOOL viewers know that Tori (Hira Ambrosino) has been jittery from the moment she showed up in Salem. It’s obvious that Tori’s anxiety level goes through the roof whenever she spots John (Drake Hogestyn) or Marlena (Deidre Hall). Even Paul (Christopher Sean) has caught on to the fact that something’s up with his mom. Fortunately, it seems the secret is starting to unravel. Will (Guy Wilson) and Lucas (Bryan Dattilo) are about to find a photograph of Tori that could provide a bit of insight into her mysterious past.

Meanwhile, Paul will be pondering his future. “Days of Our Lives” spoilers for Thursday, March 12, hint that Paul may decide to stay in Salem for a bit longer than he planned. In an interesting twist, John will be the one who suggests Paul should stick around. The rumors say that John could turn out to be Paul’s dad so perhaps the pair can unknowingly enjoy a little father/son bonding. Whatever the case, there has to be a reason John is being included in Paul and Tori’s storyline. Stick with “Days” to find out what the connection is.

Other “Days of Our Lives” spoilers say that Serena (Melissa Archer) will find herself in yet another predicament involving Eric’s (Greg Vaughan) elephant statue. Since Nicole (Arianne Zucker) saw Serena’s duplicate elephant drop out of her bag, Serena will have to make a quick decision about what to do next. Perhaps she’ll try to explain her way out of it, but Nicole’s already suspicious of Serena’s shenanigans. There’s no way Nicole will buy what Serena’s selling. Maybe it’d be better for Serena to just spill the whole story and make Nicole fear for Eric’s life. As much as Nicole tries to convince herself that she loves Daniel (Shawn Christian), Eric probably still has most of her heart. Nicole might be willing to let Serena make the switch if it means protecting Eric. Check out the Thursday, March 12 episode to see what Serena decides to do next.

Brady (Eric Martsolf) and Theresa (Jen Lilley) should also be worried about what lies ahead. Kristen (Eileen Davidson) is set to return to Salem any day now and when she does, it’s going to be epic. Theresa remains perplexed by the whole Dr. Mandrake (Sal Landi) situation, but she’ll figure things out soon enough. Until then, DOOL viewers will be watching and waiting for Kristen to bring back some chaos.

So “Days” fans, what do you think about the news that Will and Lucas could uncover part of Tori’s secret? Do you think Paul will decide to stay in Salem for good? How will Serena deal with her latest obstacle? Are Brady and Theresa prepared for the surprise that Kristen has in store? Let us know what you think in the comments below and don’t forget to check CDL tomorrow for the latest “Days of Our Lives” spoilers, rumors, updates and news.