‘Days of Our Lives’ Spoilers: Stefano Gets Dirt on Ben for Chad, Marlena Confronts Tori, Will Poisons John’s Image of Paul 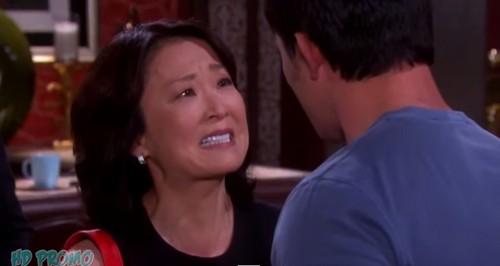 “Days of Our Lives” spoilers for Thursday, April 9, tease that Marlena (Deidre Hall) will confront Tori (Hira Ambrosino) with her suspicions. Will (Guy Wilson) was wrong about the identity of Paul’s (Christopher Sean) father, but his research still helped him realize that Tori was lying. After Tori reacted so strangely to John (Drake Hogestyn), Will and Marlena put it all together and determined that Paul must be John’s son. Naturally, Marlena is angry and confused about why Tori would keep the news from John. Marlena will confront Tori with her discovery as she tries to get to the bottom of things.

Meanwhile, John will do his best to understand why Will would cheat on Sonny (Freddie Smith). Good luck with that, John. Most DOOL viewers still haven’t figured that one out. Will had a loving marriage before he put it on the backburner for his career. Nevertheless, Will’s going to spin the story as he typically does. “Days of Our Lives” spoilers indicate that John will be influenced by Will’s version of events. It sounds like “Days” writers are trying to create some tension between John and Paul. John walked in on Sonny and Paul sharing an intense moment so he’s already wary of him hanging around town. John has no idea that Paul is about to be in his life for good. The rumors say John and Paul will hit a few snags, but they’ll be buddies before long. Stay tuned to DOOL to watch the father and son grow closer.

Other “Days of Our Lives” spoilers hint that Stefano (Joseph Mascolo) will once again help Chad (Billy Flynn) with his scheme to get back at Abigail (Kate Mansi). Those DiMeras just love bonding over manipulation. Stefano will get his lackeys to do a bit of research on Ben (Robert Scott Wilson) and he’ll pass the information along to Chad. We don’t know what dirt Stefano’s team will dig up, but you can bet that Chad will be able to use it to his advantage. If he can get Ben out of the picture, Chad can swoop in for the win. However, Chad still seems to have feelings for Abigail and that could put his plan in jeopardy. Stick with the NBC soap to find out if Chad will follow through with his plot or follow his heart instead.

So “Days,” fans what do you think about Marlena’s confrontation with Tori? What about Will trying to manipulate John’s view of Paul? When John gets updates on Paul’s paternity, will it change his perspective? What juicy details will Stefano get his hands on? Are Ben and Abigail headed for trouble? Let us know what you think in the comments below and don’t forget to check CDL tomorrow for the latest “Days of Our Lives” spoilers, rumors, updates and news.